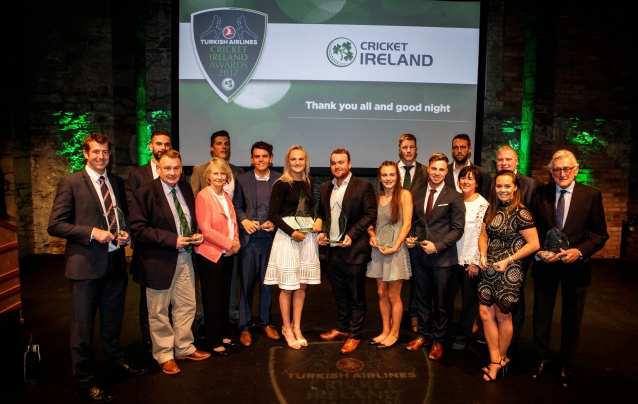 Paul Stirling and Gaby Lewis were rewarded for excellent seasons in the green jersey after scooping the top prizes at the Turkish Airlines Cricket Ireland Awards 2017.

Gaby Lewis was the star of the night making off with both the Hanley Energy Women’s International Player of the Year and the Devenish Nutrition Female Youth International Player of the Year awards. Lewis scored 340 runs during the senior tour to Dubai and South Africa in May before leading the Under 19s to three wins out of four at the prestigious Malvern Festival. Captaincy didn’t affect the young YMCA star as both her batting and bowling were exceptional during the tournament.

“I’m absolutely thrilled to have won these awards for my play in 2017,” said Lewis after the ceremony. “I was very lucky to play with some great players in the senior team and we are looking forward to the World T20 qualifiers in 2018.”

Paul Stirling held off tough competition from William Porterfield and Kevin O’Brien to win the Turkish Airlines Men’s International Player of the Year. The award was voted for by the players and Stirling scored 704 runs in the qualifying period. Stirling was player of the series when Ireland faced Afghanistan in India in early 2017 and will be looking to replicate that form when the sides meet again in Sharjah in December.

“I’m absolutely delighted to accept this award,” said Stirling on Friday night. “In any sport, when your own players and teammates vote for you and feel that you’ve contributed over the course of the season then it makes it extra special.”

Jacob Mulder succeeds Barry McCarthy as the Sunday Independent Aengus Fanning International Emerging Player of the Year after impressing in the Desert T20 and then with the Ireland Wolves squad during the summer. This included a spell of 5-32 against Scotland A which helped secure victory.

Northern Knights captain James Shannon was named Hanley Energy Inter-Pro Player of the Year after an outstanding individual season. Shannon scored 754 runs across all formats, more than 200 runs ahead of anyone else. Perhaps his most eye-catching performance was an unbeaten 140 at Stormont in the Hanley Energy Championship to secure a draw against the eventual champions the Leinster Lightning.

The Cricket Writers of Ireland inducted two people into the Hall of Fame this year, in Mary Pat Moore and Miriam Grealey. Moore made her debut against The Netherlands in 1983 and scored 988 runs in her 47-match international career. Grealey played 80 times for Ireland and was the first Irish person to be awarded Honorary Life Membership of the MCC earlier this year.

Ireland women’s captain Laura Delany won the Toyota Super 3s Player of the Year after scoring 317 runs and taking 10 wickets during the 2017 season.

Meanwhile, the Shapoorji Pallonji Academy presented two awards for the first time this year. Lara Maritz won the Female Player of the Year Award for her progress this season which has seen her working with the Academy over the winter and travelling to Dubai and South Africa with the senior Ireland women’s squad.

The Shapoorji Pallonji Male Academy Player of the Year was won by Simi Singh. He scored heavily for the Ireland Wolves during the summer and progressed to play with the Ireland senior men’s squad. His unbeaten 194 across two innings against Gloucestershire seconds showed his aptitude and application for multi-day cricket.

Waringstown won the Tildenet Club of the Year after their First XI claimed four trophies this 2017 season. They won the NCU Premier League and defeated The Hills in the Irish Senior Cup Final in Bready. This was the 5th Senior Cup triumph drawing them level with North County at the top of the honour roll.

CIYMS’ Nigel Jones was named O’Neills Club Player of the Year for his all-round performances throughout 2017, that’s before his heroics in flying in for the AJG Cup Final, scoring 80 and flying out to continue the Under 19 World Cup Qualifying campaign in Jersey.

Heading up that Under 19 coaching ticket is Ryan Eagleson and he was named Clear Treasury Coach of the Year at last night’s Dublin city centre event. Captain of that side who will play in the ICC Under 19 World Cup in January is Harry Tector and he was named Flogas Male Youth International Player of the Year.

Two categories acknowledged work that ensures cricket can be played every summer with officials and, for the first time, groundsmen being recognised. The IAA Official of the Year is scorer Andrew Mooney, while the inaugural Notts Sports Groundsman of the Year is Dale McDonough.

The Oasis Volunteer of the Year, in honour of Derek Scott went to a very popular winner on the night, David Ramsay of Kerry Cricket Club. Ramsay was the founder and continues to be the lifeblood of the club who just this year unveiled a new ground and pavilion, the Oyster Oval, set against the scenic backdrop of Tralee Bay, with a match against MCC in May this year.

The Gibney’s Outstanding Contribution to Irish Cricket, in honour of John Wright went to a man who served Cricket Ireland and Irish cricket for 18 years as reporter and photographer. A driving force behind raising the media profile of Irish cricket and with a commitment to telling the story in pictures, Barry Chambers secured the accolade much to the praise and delight of the gathered audience.

There was more good news on the night as Hasan Mutlu, General Manager Ireland of Turkish Airlines announced that they had extended their sponsorship of Cricket Ireland into 2019. Hasan Mutlu expanded on the announcement saying: “This is a momentous day for both organisations, as we cement our relationship, we can clearly see the immense potential for both brands. As cricket in Ireland moves into a new era with Test status, Turkish Airlines are delighted to be announcing tonight that our sponsorship of Cricket Ireland and the Ireland Men’s cricket team has been extended to 2019.”

Dennis Cousins, Commercial Director for Cricket Ireland added: “Agreeing to extend our partnership with a world-famous brand like Turkish Airlines to 2019 is a great boost for Cricket Ireland. The national and international reach of Irish cricket gives Turkish Airlines a platform to leverage their brand, not just in Ireland, but globally, across territories where we both enjoy high levels of visibility and a shared footprint. India, Bangladesh, South Africa and the UK are just some of these territories and we look forward to growing our partnership further with Turkish Airlines, one of the leading sports sponsorship rights holders globally.”