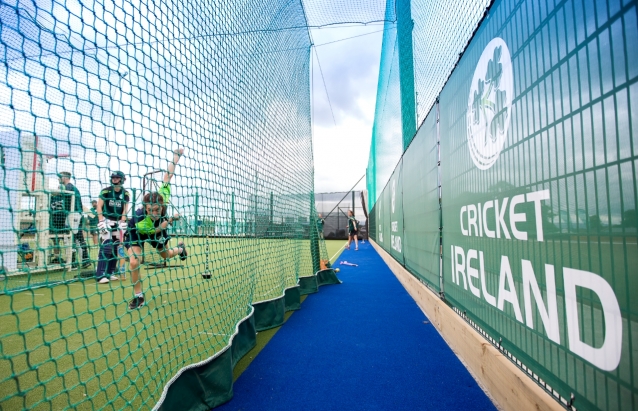 On 13 August 2018 we opened Phase One of the facility, which includes:

• Five artificial practice wickets with a synthetic surfaced practice area (1,088 m2), including 25 metre bowler’s run-ups and a 6.2m high safety netting surrounding the section. Each lane is retractable allowing players to have a double net with more space, or even an open net using the entire area – this can then utilise fielders as well in more match-like conditions. The Notts Sport Ultra Grass surface consists of a performance pad underlay, and we have incorporated two slow and three fast lanes by varying the thickness of the pad.

• A tension net at the rear of the artificial practice wickets allows for coaches and players to observe safely, and black and white sightscreens allow for both red and white balls to be used.

• Thanks to the Sports Capital Grants programme funding we have purchased a ‘Merlyn by BOLA’ Spin Bowling Machine. The Merlyn can replicate any spin type and with the use of different mat surfaces, any type of conditions.

• Thanks to the Sports Capital Grants programme funding we have also purchased a ‘TrueMan’ bowling machine (the first one ever in Ireland). This cutting edge machine displays a high-contrast LED animation of a bowler on the front of the Bowling Machine which synchronises exactly with release of the ball. It is electromechanically active and programmable by any Wi-Fi enabled device. All the machines functions (line, length, speed and swing) can be manipulated and saved as individual balls, overs or spells. They can then be used as selected or ‘shuffled’ to produce random sequences. The bowler animations are all legitimate bowling actions that encourage the player to employ the right batting sequences and make cleverer decisions. If you choose not to pre-programme each delivery, a random variation of speed, line and length can be programmed. Phase Two - the next stage of the project

Phase Two, which is hoped to be completed by 2020, will feature a dedicated building incorporating changing facilities, coaches zone, meeting spaces, performance analysis area, and a player zone; an ethylene tetrafluoroethylene (ETFE) clear roof canopy over the turf wickets - which will be a world-first in cricket - which will allow players to practice on grass including their run-ups throughout wet weather as well as controlling climate, pitch moisture and ground conditions.

The opening event was attended by: “We’re delighted to be opening Phase One of a truly world-class training facility – an asset that will benefit this and future generations of cricketers across Ireland.”

“The design of this facility has been developed through significant research of the world’s best cricket training facilities by our coaches and performance staff. Not only does this make the High Performance Centre leading-edge, but its co-location with the Sport Ireland Institute’s high performance gyms and testing facilities makes this the envy of cricketing nations around the world.”

“The growth of cricket in Ireland at all levels in the last 10 years - and Ireland’s elevation to Full Membership of the ICC - has highlighted our sport’s deficit in training infrastructure.”

“The new centre will provide Ireland-based players with high quality training and preparation, and will service the growing demand of multiple international and provincial teams, male and female, senior and junior – not to mention our national academy – all of whom are currently using club facilities which are already over-stretched accommodating our playing schedule, let alone training needs.”

Mr McCollum recognised the various funding and support partners that generously supported the development of this project to date.

“Firstly, we would like to thank the Irish Government and Sport Ireland for their ongoing support for cricket. Through both financial support and provision of a lease for the land here at the Sport Ireland National Sports Campus, we now have a dedicated home from which we can push our sport forward to new heights.”

“Secondly, we would like to thank our major funding partners, the International Cricket Council and Mr Denis O’Brien. Your financial contributions towards this project have ensured we have been able to bring our vision to fruition, and have placed Ireland amongst the best in world cricket.”

“Finally, in creating this outstanding facility I would like to thank Architect and Project Manager Ciaran Mac Mathuna, main contractors Clive Richardson Ltd, and Cricket Ireland official suppliers Notts Sport and Tildenet, who have all contributed to it.”

“Projects like this need both vision and a determination to make them happen, and we must recognise the dedicated work of Richard Holdsworth, Performance Director at Cricket Ireland, for creating the vision and overseeing the delivery of Phase One. Without that Richard’s ambition to create this world-class facility, we would not be here today.” “The development of the Cricket Ireland High Performance Centre is another important milestone in Ireland’s impressive journey as a Member. It will provide significant support for the further progression of the sport and the development of young talent.”

“Creating a sustainable impact is one of our commitments to helping the game grow and the funding the ICC has provided for this project will afford the next generation of players a world class facility to cultivate their skills and progress as cricketers.”

Chairman of Sport Ireland, Kieran Mulvey, welcomed cricket to the growing number of sports with a presence on the Sport Ireland National Sports Campus:

“On behalf of Sport Ireland I am delighted to welcome Cricket Ireland to the Campus. This fine facility will help ensure Ireland’s top cricketers continue to produce fine performances on the international stage.”

“The location of the new practice facility is ideally suited for all of Cricket Ireland’s High Performance teams and staff utilise the excellent facilities and services of the Sport Ireland Institute.”

“Since attaining Full Membership of the International Cricket Council, Cricket Ireland have put in place ambitious plans to grow the game of cricket in Ireland and the development of these world class training facilities at the Sport Ireland National Sports Campus will assist this objective as the sport continues to go from strength to strength.”