Leinster Lightning could win their seventh consecutive Test Triangle Inter-Provincial Cup on Tuesday if they record a bonus point victory over North West Warriors at Bready (10:15am).

BELFAST – CIYMS captain Nigel Jones starred with bat and ball, and James Cameron-Dow claimed a remarkable hat-trick, as the Belfast-based side won their play-off match against YMCA by 15 runs and claimed the prize of being Ireland’s first-ever representative at the European Cricket League competition.

As of midnight tonight, the Irish Government has raised Dublin to Level 3 in its COVID-19 Roadmap. We would like to clarify the practical implications of the directives for the cricket family.

DUBLIN – On the eve of the Clear Currency All-Ireland T20 Cup Final – Ireland’s only national club cricket cup competition in 2020, Cricket Ireland has announced changes to its Committee structures to drive a more focussed and strategic approach to developing the game at a grassroots level across Ireland.

YMCA and Donemana will battle it out for the right to be crowned Clear Currency All-Ireland T20 Cup champions when they meet at Belmont on Saturday (1pm).

BELFAST – Tomorrow’s Clear Currency All-Ireland T20 Cup Final will be a clash between two clubs hungry to prove themselves on the national stage for different reasons – one side is a young, star-studded side from Dublin that has never won a national club title before, while the other side - from a small village in the North West – and has produced their share of international talent over the years, but hasn’t won a national title since 2000. Both sides are steeped in cricket tradition and fought their way to this year’s decider during a challenging season, and the both captains are desperate to finish their campaigns with the Cup. 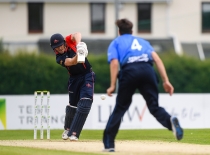 After two matches were lost due to bad weather, the third match of the Test Triangle Inter-Provincial Cup is set to get underway on Thursday morning at Comber when the Northern Knights take on the Leinster Lightning (10.15am start).

DUBLIN – Cricket Ireland today announced that long-term business partner, Tildenet, has agreed a further 12-month extension on its relationship as the Official Nets and Covers Supplier to Cricket Ireland.

After a false start on Thursday due to bad weather, the Test Triangle Inter-Provincial Cup is set to get underway on Tuesday morning at Bready when the North West Warriors take on the Northern Knights (10.15am).