Ireland's Under 19 side suffered a complete washout in their tour of Scotland where they were due to play three matches. Despite a reserve day being scheduled as well, the entire week saw no cricket as the summer of poor weather that is affecting both Ireland and the United Kingdom continues. It has robbed the Under 19's of crucial preparation before the World Cup this August. Next up for the Under 19s are two matches against the England Under 19's at Grace Road, Leicester.

Day 1 of Under 15 Interpros

Leinster and the North West both scored comfortable wins on the opening day of the 2012 Under 15 Inter-provincials in Belfast. y in Belfast.

The Cricket Australia Youth Selection Panel (YSP) today announced the final 15-player squad for the ICC U19 Cricket World Cup which will be held in Queensland in August, as well as an 18-player squad for the pre-tournament camp and series against Pakistan later this month. Pat Cummins was a notable absentee

Leinster big victors over Munster, whilst the NCU squeeze home in a thriller against the North West at the first day of the Under 13 Inter-provincials in Cork

Afghanistan to take on Australia in ODI

World number one ODI team, Australia, will play the emerging Afghanistan cricket team in the Middle East next month in the latest step that recognises Afghanistan’s increasing importance in world cricket.

Despite the terrible weather on the 23rd June, the RSA Kwik Cricket challenge was partially completed with the girl’s finals taking place on the all weather hockey pitches at Stormont.

NCU name U15 Interprovincial Squad for 2012

The NCU youth selectors have named the following squad of 13 players for this year’s U15 Interprovincial Tournament which runs from the 4th to 6th July at the Stormont grounds in Belfast.

NCU name U13 Interprovincial Squad for 2012 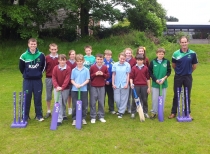