DEHRADUN - Afghanistan defeated Ireland by five wickets in the first T20I in Dehradun in a thrilling match defined by two record-breaking mid-to-lower-order recoveries.

Don’t be fooled by the final standings. Despite finishing third out of four teams in the Oman T20I Quadrangular Series, behind European rivals Scotland and the Netherlands, Ireland only did so on net run rate, and emerged from the competition with plenty of positives – a new big-hitting opening partnership chief among them.

Ireland Men's cricket team will take on Afghanistan in a three-match T20 International Series on 21, 23 and 24 February 2019. Here's what you need to know.

PRESS CONFERENCE: Paul Stirling ahead of the T20I Series against Afghanistan

DEHRADUN – Ireland T20I Captain Paul Stirling participated in a press conference ahead of the three-match T20 International series to be played at the Rajiv Gandhi International Cricket Stadium in India. 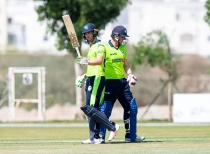 DEHRADUN – The Ireland Men’s cricket team arrived in India last night ahead of a nine-match series against Afghanistan starting on Thursday. Top-order batter Andrew Balbirnie sat down for an interview today and spoke about the Oman series, Stuart Poynter’s six and feeling old.

DUBLIN – Ireland Women’s Cricket Team will face West Indies, Zimbabwe and Scotland in a busy year for the national side, ahead of a T20 World Cup Qualifier campaign in late summer – and fans will be able to enjoy three T20 International double-headers with the Ireland Men’s team in July. 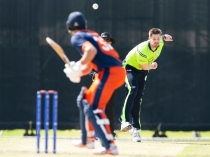 MUSCAT – Ireland’s wicket-keeper Stuart Poynter struck a miraculous six over mid-wicket off the last ball as Ireland won its final encounter of the T20I Quadrangular Tournament against Netherlands at the Al Amerat Cricket Ground in Oman. 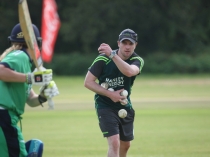 Cricket Ireland has announced two new coaching courses to encourage people interested in getting into cricket coaching or looking to improve their skills and knowledge.

MUSCAT – Ireland’s newest opening pairing of Ireland Captain Paul Stirling and Kevin O’Brien put on a record partnership in setting a competitive total, but Scotland powered their way to victory latest encounter in the T20I Quadrangular Tournament at the Al Amerat Cricket Ground in Oman.

MUSCAT – Boyd Rankin is one of Ireland’s lynchpin bowlers, and will play a pivotal role across all three formats of the game over the next six weeks. He sat down for an interview the day after his side defeated host-country Oman in the first match of the Quadrangular T20 tournament.