1,000 matches: CEO Warren Deutrom on the growth of cricket, his hopes and his biggest frustration

DUBLIN – This Friday sees the start of the men’s T20 International series between Ireland and Afghanistan in India, and the match will be the 1,000th Irish men’s match across all formats – a milestone that Chief Executive of Cricket Ireland, Warren Deutrom is proud of, but believes greater days are yet to come for the sport in Ireland.

DUBLIN – 21-year old uncapped wicket-keeper/batsman Stephen Doheny has flown out to India as a replacement for Gary Wilson in the Ireland Men’s squad, who are set to play a T20 International series against Afghanistan starting on Friday. Ryan Eagleson, Academy Performance Coach, will also be flying out tomorrow to join the squad coaching staff, supporting acting Head Coach Rob Cassell in Graham Ford’s absence.

DUBLIN - The 2020 Turkish Airlines Irish Cricket Awards saw two new inductees enter the Cricket Writers of Ireland Hall of Fame - Alan Lewis (no.17) and Susan O'Neill (no.18). We caught up with the pair backstage at the event. 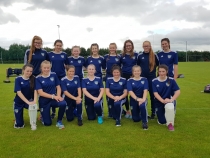 MAGHERAMASON - The North West Cricket Union has been nominated for National Governing Body Champion at the Female Sports Forum 'Active, Fit and Sporty Awards' this Wednesday, and General Manager Peter McCartney believes the nomination alone is great recognition for the work of his team in growing girls and women's participation.

DUBLIN – The Board of Cricket Ireland has been briefed on the progress of the Euro T20 Slam, and a range of other strategic matters, at its most recent Board Meeting held at Ballymascanlon Hotel in Dundalk.

Thailand tour called off for Ireland Women due to Coronavirus risk

DUBLIN – Cricket Ireland today agreed to the cancellation of the upcoming Ireland Women’s tour to Thailand after a request from the Cricket Association of Thailand, with countries involved in the quadrangular tournament to begin working on alternate fixtures in the lead up to the ICC World Cup Qualifier in July.