1,000 matches: CEO Warren Deutrom on the growth of cricket, his hopes and his biggest frustration 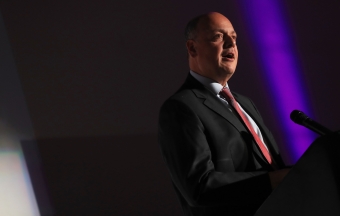 DUBLIN – This Friday sees the start of the men’s T20 International series between Ireland and Afghanistan in India, and the match will be the 1,000th Irish men’s match across all formats – a milestone that Chief Executive of Cricket Ireland, Warren Deutrom is proud of, but believes greater days are yet to come for the sport in Ireland.

The first match played by a representative Irish side was 10-11 September 1855, when a Gentleman of Ireland took on the Gentlemen of England at the Phoenix Park in Dublin, a fixture recognised by Cricket Ireland as the first for which it awarded caps. On that occasion the Irish side won by 107 runs.

Speaking at the recent 2020 Turkish Airlines Irish Cricket Awards in Dublin, Deutrom – who began as Chief Executive in December 2006 – was excited for the milestone, but was firmly looking ahead to what’s next for Irish cricket.

“Within weeks of me joining what was the old Irish Cricket Union in December 2006, the World Cup in 2007 came along. For me, that was the point it became so clear there was incredible talent and belief in Irish cricket, and that gave us as an organisation the self-belief to be better. There seemed to be no reason, thereafter, why we couldn’t chase bigger goals.”

“I think seeking Test cricket as a goal followed the 2011 World Cup - it was a spectacular occasion for us to beat England in Bangalore. It was the moment we said, do you know what, we have done this again - the effort that we have been putting in behind the scenes is beginning to show that we, as an entity, were as accomplished as the guys on the pitch. I think it was obvious that greater opportunities were out there for us, it was just a case of us going out there and saying’ look what we’ve achieved again as an organisation, both on and off the pitch.”

With the 1,000th match approaching, does Deutrom have a favourite moment?

“That night in Bangalore, March the 2nd 2011 - watching at 111-5 and thinking ‘don’t let us lose by 200’. After a while we realised something remarkable was happening. We had that sheer moment of disbelief, the phone going off the hook, texts coming in, people looking at us for various reactions, and then doing about 50 interviews the following day. That for me will always be the most extraordinary moment in my time. This was followed very closely by that Test against England at Lord’s last year. Why? Against that team, in that format, at that venue - it just crystallised the journey we have been on from the very start.”

What does Deutrom see as Cricket Ireland’s next mountain, or mountains, to climb?

“I think now that we have crossed a major Rubicon and become a Test nation, we’re basically now the Juniors in Big School. So for us, it’s aiming to be properly competitive across all three formats on a consistent basis.”

“When we achieved Full Membership, we wanted to firstly get into the ICC’s Future Tours Programme, wanted to properly commercialise those fixtures, and then sought to make sure we put in place the building blocks to genuinely replace County Cricket - which we knew at some stage would be lost to us - and develop the Inter-Pros. Not just the quality of the competition, but the quantity as well. This is still a work-in-progress, but well on the road.”

“The one big thing that is still on the to-do list - and is still a frustration for me - is to get a major stadium or a major ground developed in Dublin. We spend hundreds of thousands of euros every year simply trying to create venues to host our fixtures. That’s the real challenge for us. If we can spend that money instead on developing talented cricketers - girls and boys - investing that money in grassroots programmes, that’s where we would like to spend our money rather than enriching infrastructure providers for our matches. That’s the really key thing for me next.”

The series will be livestreamed via Youtube. Details to be announced.