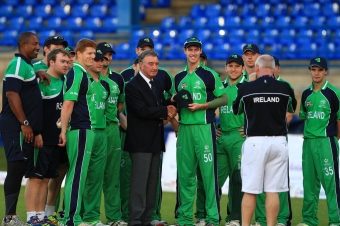 He may be just 21 years of age but the Leinster Cricket Club and Somerset CCC man George Dockrell brought up a century of Ireland appearances last night against Jamaica in Trinidad.

To mark the occasion we thought we would take a look at a few memorable images of George since his debut for Ireland in 2010. At the 2010 World Twenty20 in the caribbean dismissing Ramneresh Sarwan Trapping the Master, Sachin Tendulkar LBW at the 2011 World Cup A maiden fifty for Ireland against Namibia in 2011 Working hard in training in Colombo in 2013 Sweeping the boundary in 2013 against Pakistan at Clontarf Crucial wickets in the Intercontinental Cup Final in December 2013 Thanks to INPHO Photography for all the images.