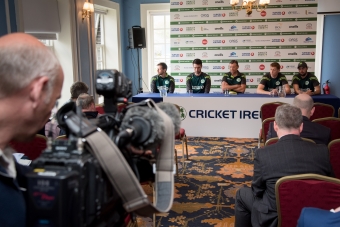 The Test Match will take place from 11-15 May 2018 at Malahide Cricket Club Ground in Dublin.

The final playing eleven will be named on the morning of the Test Match (Friday 11 May 2018). Player profiles available below.
As announced last week, the broadcast package for the Test is in three parts:

• Sky Sports will broadcast ball-by-ball coverage in the Ireland and UK markets of the Test Match against Pakistan (11-15 May 2018).
• RTÉ Television will broadcast a 1-hour highlights package of every day’s play for the Test Match against Pakistan.
• Pitch International have sold the overseas television broadcast rights in a number of countries, across a number of networks including in key markets like the US, Canada, sub-Saharan Africa, the Middle East, south Asia and Australia.

Pre-sale tickets are selling well, with online sales through Ticketmaster.

The Ireland Men’s national team is proudly supported by Turkish Airlines, whose support for Irish cricket has been featured in a new article in the May edition of Skylife (in-flight magazine).