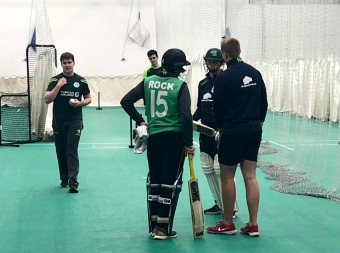 The Academy training at North County Cricket Club in 2018

DUBLIN – Cricket Ireland has today named 15 players in the latest Cricket Ireland Shapoorji Pallonji Men’s Academy for 2019, with an announcement about the intake to the Women and Girls Academy to be made in December 2018.

The Shapoorji Pallonji Cricket Ireland Academy, established in 2013, aims to identify and support the most promising young male and female players in the country providing them with a bespoke player development programme under the ethos of supporting them to be ‘the best version of themselves in life and cricket’. The purpose of the Academy is to develop resilient, confident cricketers of the future, who are ready to perform on the world stage.

Of the eight named in the Senior Academy, two players have gained elevation from last year’s Emerging squad, being:

Two other new faces in the senior programme are:

“From last year’s Academy intake, Nathan Smith, Jack Tector, Harry Tector, James McCollum, James Shannon, Simi Singh, Tyrone Kane, Josh Little, Lorcan Tucker, Shane Getkate and David Delany are amongst those who have now graduated from the Academy as they take steps forward in their playing careers. Some of these players will make the step up to being fully professional while others will be in transition. For others leaving the Academy there will be the opportunity to prove themselves through club and provincial cricket.”

“We have spent a lot of time in recent years aligning the development pathway programmes, so that the Academy, Senior, Youth, and Provincial Programmes all now work closely together. It is expected that many of the players now outside of the Academy will still benefit from Ireland Wolves / Academy fixtures and support services available.”

“We decided the Academy would involve two slightly smaller groups this year, which will allow us to provide improved athlete-centred training and support – a more focused and committed approach towards helping our players achieve their potential on and off the field.”

“Ryan Eagleson [National Academy Performance Coach] and I believe that every year the bar gets raised and this year is no exception with competition for places extremely high. If you take batting as an example, last season we saw 13 hundreds scored (five by Irish youth players, and seven between the Academy and Wolves squads). There were also some excellent bowling performances throughout the male pathway and it was our best summer ever for our pathway teams results-wise.”

“Our Senior and Emerging Academy players train weekly in regional bases [North County, Jordanstown or Bready] with the support of Academy coaching staff, while they also receive additional support and sessions from specialist skill’s coaches. We ensure our Academy players follow fitness programmes with supervision and regular testing overseen by Lead Strength and Conditioning Coach, Brendan Connor, and with support from Cricket Ireland’s Head of Physiotherapy, Mark Rausa.”

Johnston also pointed to a number of individual recognitions bestowed on Academy players that demonstrated the success of the programme and talent identification for the intake to the Emerging squad:

“As well as international honours for many of our players – such as Tyrone Kane making the Test team - Harry Tector was named Academy Player of the Year at the Turkish Airlines Cricket Ireland Awards night. Harry is now playing club cricket with distinction in Sydney and was recently named as captain of the Ireland Wolves squad on their Sri Lankan tour.”

“Meanwhile Harry’s younger brother - and new Academy recruit - Tim was named Youth Player of the Year at the Awards night. Tim captained the Ireland Under-15’s this year scoring heavily. He is joined in the Emerging squad by fellow Under-15s batsman Nathan McGuire from Rush Cricket Club.”

In addition to the home-based programme, the Academy also undertakes a range of other development activities including:

• helping place a number of players overseas this winter to gain valuable experience of southern hemisphere conditions;
• operating annual pre-season camps at our High Performance Training Centre in La Manga, Spain;
• running educational days and workshops, drawing from other sports, sport psychology and wellbeing, all part of driving a holistic approach of development around the athlete.