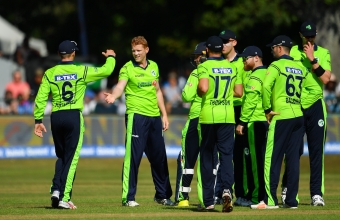 19 men's central player contracts have been finalised for 2019

DUBLIN – Cricket Ireland has today confirmed the completion of 19 men’s player contracts for the Ireland Men’s senior international squad for 2019.

A total of 19 central player contracts have been offered and accepted for 2019 - 16 full-time contracts, with three players on part-time contracts as they are still playing English County cricket:

“We are pleased to have finalised the contracts ahead of 2019 – a year that will be one of the biggest in Irish cricket history. Not only will we be playing our first men’s Test match away from home, but we host five Full Member nations during our summer, and following this we make a trip to Lord’s to play our inaugural Test match against England. The ‘international’ year will then conclude with a T20 World Cup Qualifier in October.”

“There is no secret that Irish Men’s cricket is coming to the end of a cycle, partly signified in 2018 with the retirement of Ed Joyce, Niall O’Brien and John Anderson. Through this year’s central contracts – combined with the forthcoming Emerging Player contracts that will be announced in early 2019 – you will start to see a clear direction that we are heading in our succession planning for the future.”

“Now is the time for emerging players looking to press for higher honours to step up and show their credentials, just like Tyrone Kane, James McCollum and Harry Tector have in joining the central contracts list this year. These players have earned their place through their performances and showing the necessary dedication and commitment to improving their games.”

“Full Membership, while a boon for Irish cricket, also brings with it some new challenges for young cricketers coming through the system. In the past, emerging internationals may have been able to establish themselves in the senior squad playing against Associate nations or in lower-profile tournaments. Now, conceivably, a player making their debut may be making it in a Test match against a top-tier nation. That is an enormous step up in standard and profile, and we will need to work with our players to ensure they receive the support they need to make that big step.” As part of that support, Cricket Ireland has since 2013 invested significantly in the development of its youth pathway structure, which has included establishing the Shapoorji Pallonji Cricket Ireland Academy and launching the Ireland Wolves programme.

“The importance of the Academy and Wolves programmes to the future of Irish cricket is twofold. First and foremost, they aim to identify and develop talented cricketers – to provide that pipeline of up-and-coming talent feeding into the senior men’s squad. However, the second benefit these programmes provide is to develop the people themselves. International cricket as a Full Member is a demanding environment, with the levels of expectation and scrutiny beyond what young players will ever have experienced. As such, we are working closely with the players to ensure those who rise to the top are confident, resilient and balanced individuals, able to cope with the demands and pressures that they will face.”

“I think we can quite confidently state that the Academy and Wolves programmes have been directly instrumental in the likes of Chase, Kane, Shannon, Singh, Tector and McCollum being in the 2019 contracts list. Each of these players has earned their place and will hopefully be the backbone of the next generation of players who will carry Ireland through the next cycle.”

In 2019 Cricket Ireland will rename its Inter-Provincial contracts ‘Emerging Player contracts’, and these will be announced early in the new year.

Tickets are now available for the Ireland v England ODI from Ticketmaster.

Tickets will shortly be available to purchase for the ODI Tri-Series matches as well.