195* from Poynter sees Clontarf through: ISC Quarter Final Round Up 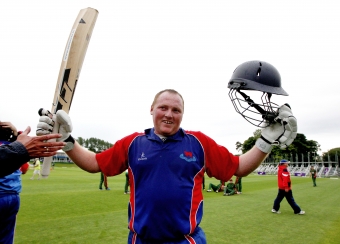 Andrew Poynter’s fine run of form continued yesterday as a spectacular 195 not out from the Clontarf guided the home side to a massive 163 run victory over St Johnston in the RSA Irish Senior Cup quarter-final.

Having won the toss, it looked like St Johnston’s decision to field had paid off early on as they claimed the wicket of Collier (3) and the prized scalp of Bill Coghlan (15) early on, but that’s where the joy ended for the visitors as Ireland A captain Andrew Poynter combined with underage international Colin Currie to guide the home side to 315-2 in their 50 overs. Poynter’s 195 came in just 127 deliveries and included 24 fours and 6 maximums, while Currie finished just 9 short of his century.

With 315 on the board it was always going to be a tough ask for the North West side, and they found themselves in early trouble as a fine spell of bowling from Clontarf quick Zander van der Merwe (4-33) helped reduce the visitors to 33-6 before a late rally from Ryan Macbeth (44), Rammohan Goud (37) and Kushpal Singh (35). But Paul Ryan took the final wicket in the 40th over with the score on 152 to end St Johnston’s run in the competition.

There was a dramatic finish across Dublin at Sydney Parade where Pembroke secured a hard-fought victory over Merrion in the second last over of the match. Tyrone Kane topped scored for Merrion with 36 as they posted a below par 206-8 off their 50 overs, Barry McCarthy and Ryan Hopkins claimed two wickets each for the home side.

Pembroke were struggling in their chase having been reduced to 65-5, but McCarthy (64) and Lorcan Tucker (51) combined to bring their side to the brink of victory, with Conor Mullen (18) and Fiachra Tucker (15) seeing them home for a three wicket win in the 49th over.

There were also dramatic scenes at Sandel Lodge where, in another penultimate over finish, North Down’s batsmen chased down a massive 304 to keep the Comber side’s cup aspirations alive. Earlier Niall McDonnell put Coleraine in the driving seat with a fine 103, putting on 114 for the first wicket with Stephen Campbell (52) and 119 with Kyllin Vardhan (84) for the 2nd as the home side finished on 303-4.

Johnny Terrett (47) and Andrew Sutherland (44) got the reply off to a flying start as they combined to take North Down to 100 before Terrett was trapped lbw by Rishi Chopra. Sutherland followed soon after, but Nick Larkin (46) and Ryan Haire (45) continued where the openers had left off. But star of the show for the visitors was Peter Eakin whose quick-fire 60 off 42 balls kept North Down up with the rate, before Tamir Khan (39*) saw them over the line with just 8 balls to spare.

Again it went down to the wire Park Avenue where The Hills booked their place in the semi-finals, defeating Railway Union in a low scoring encounter. Nazeer Shoukat spearheaded The Hills bowling attack and led from the front - his 10 overs included 4 maidens at a cost of only 7 runs. Manu Kumar was in the wickets for the visitors claiming 4-15 as Railway were bowled out for 148 with only S Ullah (60) passing the 20 mark.

In reply, opener P Byrne got The Hills off to a good start with 54 before a mini collapse saw the visitors go from 54-3 to 67-5. Three more wickets fell but Tomas Murphy (13*) and Luke Clinton (8*) saw their side home with 2 wickets in hand and just 4 balls remaining.

Meanwhile in the RSA National Cup, there were wins for Carrickfergus, Killyclooney, Woodvale and Dundrum.