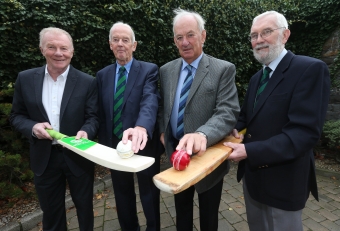 DUBLIN - The Ireland Men’s team from the famous match against the West Indies at Sion Mills in 1969 were honoured today at the Association of Sports Journalists in Ireland’s Legends’ Lunch.

2 July 1969 lives in the hearts and minds of many Irish cricket fans, being the day a fully-amateur side humbled the West Indies bowling the visitors out for 25.

Alec O’Riordan and Dougie Goodwin, who were in attendance at the luncheon, did the damage on that day 50 years ago, taking nine wickets between them in a devastating 25-over spell on a soft, green top. As can be seen by the scorecard, the visiting side could not handle the conditions and some spirited bowling on the day.

Goodwin finished with figures of 5-6, while O’Riordan claimed 4-18 with one run out completing the rout.

At the event, held at the Croke Park Hotel, O’Riordan acknowledged that conditions aided the home side immeasurably:

“The ground was just about playable; the outfield was very soft, it was a slow wicket and the wind also played a part.”

“We played well, but they could not cope with the lack of pace in what was totally alien conditions for them.”

The players were quick to rebuff the theory that has been floated that the West Indian team had been suffering from hangovers on the day of the match, noting that the visitors had just arrived straight from England the previous evening fresh from a Test match, and the two sides did not have a chance to meet each other until they arrived at the ground that morning.

“For a long time I have thought that this team deserved to have their achievement celebrated by the ASJI and I am delighted that, during my first year as President, they have joined the long list of legends we have chosen to honour.”

WATCH AN INTERVIEW WITH CLIVE LLOYD

More photos from the ASJI event Image: The players receive a special token from the ASJI, joined by David Pigot representing his late father David