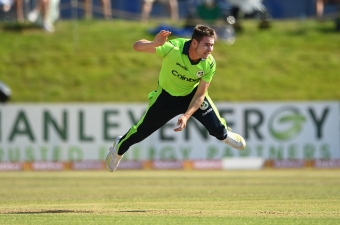 DUBLIN – Ireland succumbed to a 33-run defeat in the first game of the DafaNews T20 series against South Africa, with left-arm wrist-spinner Tabraiz Shamsi, the world’s No.1 ranked T20I bowler, spinning a web around the hosts in the chase.

Ireland Men’s captain Andrew Balbirnie won the toss and elected to bowl, and will have been pleased by his side’s effort in the field. South Africa got off to a flier, with Quinton de Kock hitting four of his first seven balls for boundaries, including a mighty six over midwicket off Barry McCarthy. But Mark Adair removed him soon after, enticing a miscue to mid-off, and the fightback was underway.

Adair was the next to strike, removing Janneman Malan, in form from the ODI series, after a juggling catch by Simi Singh, and it was the off-spinner who supplied the next wicket, Temba Bavuma attempting a reverse sweep but only succeeding in edging behind.

The Proteas regrouped, the next four overs passing without a wicket falling but also without a boundary scored, before Rassie van der Dussen attempted to release the shackles. He smashed George Dockrell for four and six in consecutive balls before cutting the first ball of Josh Little’s second over for four. The left-armer struck back immediately however, with van der Dussen toe-ending a drive to Balbirnie at cover, and another tight over from Singh followed.

A lovely piece of spin bowling from Simi Singh

The pattern of a brief burst of boundaries followed by a downfall continued, with Aiden Markram striking three of his last eight balls for four or six before some creativity from Singh outfoxed the powerful South African. Predominantly an off-spinner, he unfurled a well-disguised leggie, turning the ball away from Markram and deceiving him in the flight for Lorcan Tucker to complete the stumping. The twirler was the pick of the Ireland bowlers, conceding just one boundary and ending with figures of 2-19 from his four overs.

Five down, the tourists had little choice but to consolidate. Just two boundaries came between overs 15 and 19, with George Linde skying Adair to Singh and David Miller nicking Little behind. Kagiso Rabada gave the Proteas a final flourish, smashing the first four balls of the final over to the fence to leave Ireland needing 166 to win.

The pursuit got off to the best possible start, with Paul Stirling slog-sweeping a six off George Linde’s first delivery, but the hard-hitting opener was dismissed next ball, sweeping again but missing this time, and wickets continued to tumble thereafter.

Kevin O’Brien, returning to the side after his retirement from ODI cricket, chipped his first ball back to Kagiso Rabada, but Balbirnie hit back, striking three of his next five balls to the fence. But the introduction of Lungi Ngidi changed the contest. The right-arm quick struck with the first ball of each of his first two overs, with Balbirnie and Dockrell each edging behind.

From there, it was over to Player of the Match Shamsi. The mystery spinner claimed four of the next five wickets to fall, and by the time he was done the game was nearly over too, with Ireland nine down and still short of three figures. Singh and Shane Getkate were both bowled, the former missing a loopy delivery with an attempted sweep, and the latter fooled by a wrong-un which hit off-stump, while Mark Adair holed out to long-off for a duck. Linde chipped in with the wicket of Tucker in the midst of Shamsi’s spell.

Harry Tector threatened to mount a resistance, striking three fours in his 36, but was stumped off Shamsi, the ball turning away as he danced down the track, and with more than seven overs left to bat, it appeared likely the hosts would be bowled out well short of using their full allocation. But Barry McCarthy, making his 50th appearance for Ireland across formats, signalled his intent by lustily driving the final ball of Shamsi’s spell to the fence.

He and Little battled gamely, though without raising hopes of an upset. They ticked the strike over to start with before striking a boundary in each of the last four overs, the last of which, a six over midwicket from the bat of Little, set a new record for the highest tenth-wicket partnership in T20Is by a Full Member side, with the unbeaten 44-run stand overtaking the 36 put on by New Zealand’s Tim Southee and Seth Rance against Sri Lanka in 2019.

Each surpassed their best score in international cricket to give the home fans something to cheer, but South Africa still wrapped up a comfortable victory by 33 runs.

This six meant that the stand between Josh Little and Barry McCarthy - worth 44* - set a new record for the highest 10th-wicket partnership by a Full Member in T20Is #IREvSA #BackingGreen @ITWSports pic.twitter.com/4rfhiDkf4P