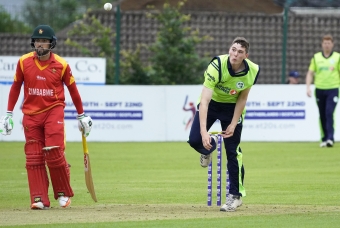 DUBLIN – Cricket Ireland has today confirmed that 19 central player contracts for the Ireland Men’s senior international squad have been offered and accepted for 2020.

22-year old leg spinning all-rounder Gareth Delany earns his first full-time senior contract, as does 28-year old all-rounder Shane Getkate. Mark Adair, who was awarded a contract during the second half of 2019, makes the list for his first full year as a contracted player. This year also signifies a new era, as this is the first year all contracts are full-time.

The contracts, developed in consultation with the Irish Cricketers Association, have been awarded to: Image: Shane Getkate has been awarded a central contract

“The Selectors have been working hard over the last two years to help identify and mould a squad of players that blends our young talented players with the experience of our senior players - a squad that can compete on multiple fronts, and one which is looking forward to playing in what will be our busiest year ever.”

“While we wish these 19 players well for the year ahead, we’d like to think that announcements like this also act as motivation for players outside this core group. The message to any player aspiring to play at the top level would be to take inspiration from some of the players on the contracts list today - they have made this list through hard work, putting in consistent performances and seizing the opportunities when they arose. We must keep driving the standards of performance higher and I know the players and coaching staff are determined to push on to the next level.”

“We’re pleased to have offered these 19 contracts as we begin a busy 12 month period that will see the squad play eight Full Member countries, including hosting Bangladesh, New Zealand and Pakistan at home and finishing the year with a T20 World Cup appearance.”

“While it’s an incredible time for both players and fans alike, we are still in the early days of being a Full Member. Player contracts are just one of many building blocks we have been putting in place. Behind the scenes there has been an immense effort by Cricket Ireland in re-establishing the Inter-Pros, creating the Shapoorji Pallonji Cricket Ireland Academy, developing the Ireland Wolves programme, formalising the talent pathway from underage national teams to the senior international side, and opening Stage One of the High Performance Centre.”

“All of this work is crucial, much of it is unheralded, but it has driven our ambition to prove that Ireland belongs at the top table of international cricket. We are creating sustainable structures behind our international teams and building for long-term success.”

“2019 was a year of progress, but despite the challenges and headwinds we have faced, 2020 is shaping up as a year that will help grow our sport in Ireland, and our sporting brand around the world.”