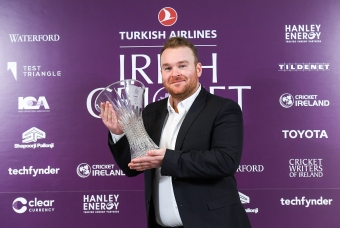 Stirling finished the year as the world’s highest run-scorer in T20 International cricket, playing 36 matches for Ireland across all formats, scoring 1,516 runs at an average of 43.31. Image: William Porterfield was recognised with a special cap to mark his 300th appearance for Ireland Image: Recent retirees were recognised on the night, including Cecelia Joyce, Isobel Joyce and Tim Murtagh Image: Susan O’Neill and Alan Lewis with their Hall of Fame recognition

A full photo gallery of the evening will be available shortly.