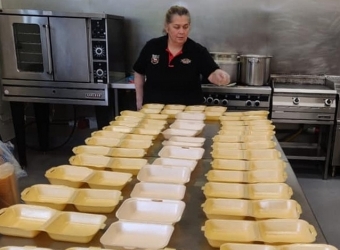 BREADY – Irish international Boyd Rankin has commended the work of his hometown cricket club, Bready, as the club’s volunteers delivered more than 300 cooked meals to elderly and vulnerable members of the local community during the COVID-19 crisis to date – with demand for the service growing weekly.

While based in Birmingham, Rankin had travelled back to Northern Ireland at the outset of the crisis to help out on the family farm as he was concerned that most of his family fell into the ‘high risk’ category. Speaking from his family home, he said:

“It’s been a challenging time for all, but when I heard about the cooking meals project at Bready it gave everyone a lift. It may sound like a cliché to call the Irish cricket community a family, but when you see volunteers and local businesses coming together like this at a time of crisis to cook meals for the elderly and vulnerable, it certainly feels like a family to me.”

“I’m very proud to see this project happening and commend the club and players for this great work.” Image: An invitation went out to the local community (photo: Bready CC)

David Scanlon, Bready’s first team captain and member of the North West Warriors inter-provincial squad, is very proud of the project and outlines how the project came about:

“At our last committee meeting in early March, before restrictions were put in place, we all acknowledged that tough times were ahead. However, we discussed how we could make a positive contribution to the local community during this time and we struck on the fact that we have a large number of elderly and vulnerable people within the community, so we agreed we would supply them with a one-off Sunday dinner.”

“We’ve run numerous community social events within the club, and provide cricket related programs throughout the year, but this is the first time we have tried a venture like this.  Our regular luncheon club, that meets at the Club every Monday, unfortunately had to stop, so the cooked Sunday dinners idea has become its replacement.”

“What had originally been envisaged as a one-off has been expanded to every Sunday for the foreseeable future. We have received numerous thanks and praise, not only for the service we are providing, but the level of food people is receiving. Each week the number of meals is increasing due to our social media posts and through word of mouth of people who are receiving the meals.”

“To date, we have prepared, packaged and delivered around 300 meals to the community. We started in week one with 60 meals, and it has risen to just over 90 last week. We have had a few more request a meal for this coming Sunday, so this number will likely rise to around 100 meals per week.” The Club’s team ethos on the field has been on display off it, as Scanlon describes the logistics behind the project:

“We have up to four volunteer cooks at a time – all adhering to social distancing practices - that prepare, package and hand meals to a our eight volunteer drivers. The drivers deliver meals throughout the community, sometimes up to 9-10 miles away.”

“The meats are prepared on a Saturday evening, and the cooks start around 9am each Sunday morning. We aim to have all the meals delivered between 12-2pm, and with the washing up to do, we usually finish around 1.30pm.”

“We’ve had also two members of the club that have kindly volunteered to produce desserts for the past fortnight, and have another one lined up for this week. The recipients really appreciate this, as do we, and it gives them a sweet to go with their meal.”

“The project has brought out the best of the community spirit within Bready Cricket Club, and the surrounding village of Magheramason. As a committee we have been really impressed with the help from players and members that have stepped forward when asked to help.”

“In keeping with the social distancing rules and the increasing numbers, we have had to ask for more help - but we are never found wanting. We have been able to source PPE, which keeps not only the volunteers safe, but the people of the community as well.” Such a project needs a level of funding, and this is where the broader community has really help out:

“It’s been fantastic to receive the support of so many. We’ve had donations from our club sponsor FAST Technologies, Fleming Agri, Nisa Store Magheramason, as well as grants from the Community Foundation NI, Derry City & Strabane District Council, Tesco and individual families throughout the community. This has meant we are able to provide this support for the weeks ahead – but just how long, nobody knows. We’ll just keep going as long as we can.”

“There is great camaraderie between the ‘Cricketing Cooks’, as we have become known, and the support from the cricket family within Bready - and families from the surrounding area - in relation to the good project we are running.  We feel very proud to be part of a club and community like ours at this time.”