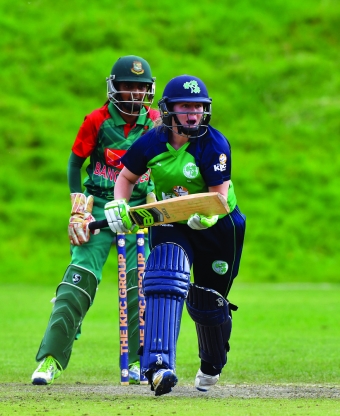 Laura Delaney put in a brilliant all-around performance for Ireland Women at Axminister as they recorded another convincing victory in the ECB Women’s County Champioship Division Two, this time over Devon.

The Leinster all-rounder was on fire with the ball in the first innings, after Devon won the toss and elected to bat. She finished with the impressive figures of 10 overs, 1 maiden, 5 wickets for 30 runs as a disciplined display from the Irish bowlers restricted the home side to 150-9. Louise McCarthy was again her miserly self with the new ball, her 10 overs only costing 14 runs.

With Devon having been reduced to 30-3, captain Fairbairn was joined at the crease by Bowden; the pair put on 94 for the fourth wicket and it looked as if Ireland’s great start was undone. But once Elena Tice had clean bowled Bowden for 26, and Kavanagh and Waldron combined to leave Fairbairn (65) stranded out of her ground, the rest of the Devon order provided little resistance - although a scrambled single off the final ball off the innings did rescue a batting bonus point.

In reply Ireland lost opener Raymond-Hoey (7) with 22 on the board, but her opening partner Cecelia Joyce was again star of the show with the bat, bringing up her third County Championship half century in as many matches to continue her fine run of form. Stand-out performer with the ball in the first innings, Delany came to the wicket at number three and was the perfect foil for Joyce as the pair put together a partnership of 95 to put Ireland on the brink of victory before Joyce was caught by Fairbairn at mid-wicket off Garton for an excellent 53.

Delany (39) departed soon after superbly caught in the covers, Garton again the bowler, but the result was never in doubt as Tice (18) and Kavanagh (12) saw Ireland home by 7 wickets, the latter bringing up the win with a sweep to the backward square boundary.

Next up for Ireland Women is the ECB T20 Group B tournament, which takes place in Lancashire on Tuesday and Wednesday - follow updates from both days on @IrishWomensCric