72 and out: Niall O’Brien announces retirement from international and first-class cricket 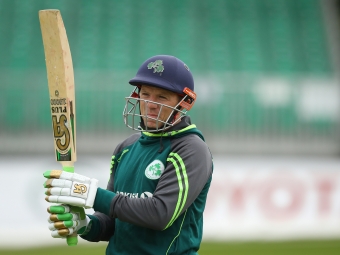 Long-term Irish international, a pivotal member of the oft-described “golden generation” of Irish Men’s cricket, Niall O’Brien has announced today that he is calling time on his international and first-class cricket career after 16 years at the top.

The 36-year old Dubliner, made his international debut for Ireland in 2002 when he stepped out at Stormont in Belfast to play a one-day match against Denmark. In the intervening 16 years, O’Brien appeared 216 times for the national side, leaving the game as Ireland’s most successful wicketkeeper with 241 international dismissals to his name.

Not just a prolific figure behind the stumps, O’Brien finishes his career as fourth highest run-scorer for Ireland with 6,097 runs at an average of 31.59, including eight centuries and 33 half-centuries. His highest score of 176 against the UAE in 2005 was almost eclipsed a few years later when he hit 174 against the same side in 2008.

The son of Irish international Brendan “Ginger” O’Brien, Niall played much of his career in green alongside his younger brother Kevin. When international players were asked to decide on squad numbers for international white-ball cricket, O’Brien chose the number “72” in honour of his match-winning total in the famous Irish win over Pakistan at the Cricket World Cup in 2007.

“It is with a heavy heart that I am announcing my retirement from international and professional cricket. I have been blessed to have been lucky enough to have represented my country for 16 years with plenty more ups than downs and for this I look back with nothing but smiles and laughter.”

“I would like to thank all my coaches and teammates who along the way have helped me become the player I was. I have had too many coaches to mention them all but a special thanks must go to Adrian “Adi” Birrell who took a chance on me in 2002 and who arranged a trial at Kent from where I started my 14-year county career which was an absolute privilege and an honour.”

“I always tried to play with a smile on my face and with an enjoyment that I think all people could see whether watching from the stands, standing with me in the field or coming up against me for the opposition. Hard work was always behind my performance and I will take this same ethos into the next phase of my career where I have been working in the Sports Agency business for the last 2 years alongside my playing commitments and will continue to pursue this avenue.” Image: Niall takes his second catch of the innings in the inaugural Ireland Men’s Test match in May 2018

“I have always had a keen interest in working within the media and I am extremely keen to gain more opportunities moving forward and with Ireland having more exposure on the global stage I am hopeful to be working on plenty of Ireland games in the near future. I will also be looking to put my Level 3 coaching badge to good use and hope to work with some of the next generation moving forward.”

“I would like to say a special thank you to Railway Union Cricket Club and all its members for helping me in the early years and especially Brian Donnelly who was an absolute hero to all young players in the club back in the day.”

“To all at Cricket Ireland a sincere thank you for allowing me to wear the shamrock for 16 years. There are too many fond memories to mention so I just wish the team and the organisation all the very best for the future and I will be watching keenly from afar. From playing relatively small fixtures at the start of my career to competing and winning world cup matches to being there to play in our first Test match meant I have achieved more than I could have ever dreamt and for this I look back with nothing but fondness.”

“Finally, and most importantly, thank you to my family for all the guidance and support down the years whether it was driving me to matches, throwing balls to me in the garden or travelling to the Caribbean to watch me play. Without you I would not have amounted to anything on the field so a huge thank you to all the O’Briens.”

“Now is a time for myself and my wonderful wife Bex to welcome our new addition into the world and enjoy some family time together.” Image: Niall leaves the field after making 57* and steering Ireland home to a 6 wicket win over Netherlands at CWC 2011

“I first met Niall in 2005 when I coached Kent and he was a young member of the Kent squad. He immediately struck me as a fine example of what a professional cricketer should be. Since then I have followed his wonderful career with much interest, and over the years he has put in many special performances.”

“He can be well proud of what he has achieved on the field but he can be equally proud of how he has operated as a professional cricketer and the manner in which he has played the game. He was an extremely tough competitor and played it very, very hard. At the same time he always showed respect for the game and the opposition. After a tough day he was always happy to have a chat and a laugh with his teammates and the opposition.”

“It will be tough for Niall to walk away after so many years, but it is nice to know that he walks away having gained many special and lasting friendships from his time in the game.”

“Alongside that he had a great international career. Niall would have been involved when we only had a couple of games a year, and I’m sure he will sit back and reflect with great pride when he sees where he has helped get Ireland to. From his Man of the Match innings in the 2007 World Cup that helped put Ireland on the global map, to walking out in Ireland’s inaugural test match. He can be immensely proud of that and everything else he achieved in his career and fully deserves all the plaudits I’m sure he will get. I would personally like to wish him all the very best for a successful future.” Image: Niall smashes a third six in his innings of 75 against India at the 2015 Cricket World Cup

“Niall O’Brien’s career has been symbolic of the rise of Irish cricket – while he grew up the son of an international cricketer, cricket was still a minority sport in his home country and he worked hard to pursue his dream of forging a professional career for himself. He has the distinction of being central to one of those truly iconic Irish sporting moments – the World Cup win over Pakistan in 2007. While he had many more achievements throughout his career subsequent to this, it is the part he played in that win that etched him into the Irish sporting psyche and something he should be justifiably proud of.”

“All coaches and staff of Cricket Ireland wish Niall the best in the next step in his career – it has been a rollercoaster ride these last ten years in Irish cricket, and Niall has been one of those who fought hard to get us to where we are today.”

Reacting to the news, former Ireland Coach Adi Birrell, now based in his home country of South Africa, said:

“Niall and Andrew White were the first two Irish players I met - they were both at the Emerging Players academy before I became Irish coach. I was immediately impressed with Niall’s attitude and work ethic which was the main reason for his selection. Now, 16 years later, Niall can be immensely proud of his enormous contribution in the progress of Irish Cricket. His 72 in the World Cup win against Pakistan will always be etched in my memory and is typical of his guts and determination. He has delighted and infuriated us equally at times but will be remembered fondly for many generations.”

You can read more about Niall and his career achievements and statistics on: