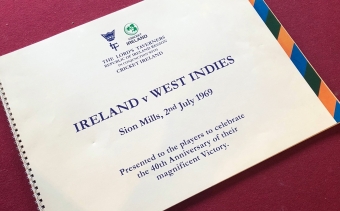 SION MILLS - On 2 July 1969 something was not right with world cricket. Well, so it seemed for fans of the game when they opened up their newspapers the next day. The Irish “Supermen”, as they were dubbed in the UK’s Daily Mirror, had humbled the mighty West Indies at Sion Mills - bowling the visitors out for just 25.

Ireland’s Alec O’Riordan and Dougie Goodwin were the only two bowlers used that day taking nine wickets between them, with one run out.

The Irish Times noted: “Spectators from Co Tyrone stood on a railway embankment to watch and apparently were not very impressed by the mighty West Indies who has earlier held England to a draw at Lord’s.”

On the 50th anniversary of this day we offer the following tributes to those mighty Irish “supermen”.

A tribute package to that famous day and famous ground