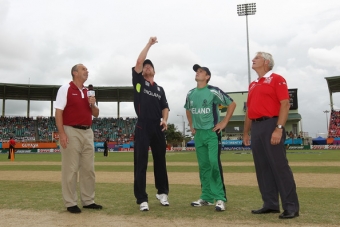 With the build up to the RSA Challenge now entering it’s final stretch, Nick Royle looks back on a case of what might have been when the two sides met in Guyana at the 2010 ICC World Twenty 20 when a place in the last 8 of the tournament was at stake.

When the Ireland players watched the 2012 World Twenty20 final in their sitting-rooms back home, it must have been a case of déjà vu all over again.

The West Indies collected the trophy after beating Sri Lanka in the final on October 7 at the Premadasa Stadium in Colombo, succeeding England as the T20 world champions.

Ireland had been denied a chance of knocking out the West Indies in the group stages by a torrential rainstorm halfway through the Group B game between the sides two weeks earlier.

In 2010, the rain had also scuppered their hopes of knocking out England in the group stages in Guyana. Paul Collingwood’s side went on to secure their first ever ICC trophy by beating Australia in the final, but they had been given an almighty scare by the Irish at Providence.

Both teams having lost their opener against the West Indies, England and Ireland came into the game knowing that the loser would be eliminated from the tournament.

Ireland had been well beaten by the hosts in the first match, while the England team were furious that they been denied a win the day before against the Windies on the Duckworth-Lewis method despite having posted 191-5 in their 20 overs.

The defeat prompted Collingwood to question whether the Duckworth-Lewis should be applied to T20 cricket (http://www.espncricinfo.com/world-twenty20-2010/content/story/458375.html) and increased the pressure on the England skipper and his side.

The mood in the England dressing room was not improved when Collingwood lost a crucial toss at the start of the final Group D game at Providence on March 4 2010.

Niall O’Brien: “It was a real Guyana wicket, not amazing for batting. It was a little slow compared to some, but it was pretty flat.”

Trent Johnston: “A key factor in the decision was that we backed ourselves to chase with the depth of our batting.  We would not have had the bowling attack to defend 140 against England, but we thought we could possibly chase a total up to 160.”

Niall O’Brien: “We chose to bowl because we wanted to chase, and we thought there was going to be some bad weather about and it could be a reduced-overs game. We thought we might have to chase a lower score in fewer overs, which we felt would suit us.”

Paul Collingwood: “We knew there was weather around, and we came into the Ireland match from that disappointing game against the West Indies, where we did not get the opportunity to use our slow bowlers Graeme Swann and Michael Yardy to stem the flow of runs.”

Johnston bowled his four overs up front, restricting the England bowlers Craig Kieswetter and Michael Lumb with an accurate spell of 4-0-14-1 he rates as one of the most effective of his career.

Trent Johnston: “I aimed to bowl tight around off stump to Michael Lumb, whose strength is cutting the wide ball through point. I got hit for a four by Lumb off my first over when I bowled a wide one, but I readjusted my line and length and they did not hit another one off me.

“2010 was the best bowling year of my Ireland career, and I was always confident that I could bowl a certain ball in a certain area to a batsman. My pace then was such that even if I was three or four inches off the mark, I would be OK. Now if I am anywhere off that mark I go for four runs!” Paul Collingwood: “Ireland were and still are a well-drilled unit who stick to their strengths and apply pressure - it is a real skill. They are a team whose bowlers say ‘We are going to put the ball on the spot, and it is up to you whether you want to take the risk to hit across the line.’

“Trent is a canny bowler who hits that good length, and we really struggled to get him away that day.”

Johnston and the rest of the Irish bowling attack had done extensive research on the England batting line-up with Cricket Ireland’s then high performance director Mark Garaway, who had worked in the England set-up as a coach and analyst.

Trent Johnston: “It was the best preparation I’d ever had for a game of cricket. Mark Garaway was instrumental in helping us create our plans. He had worked a lot with those England guys and knew their strengths and their weaknesses.”

One of the England batsman they didn’t need to do their homework for was Eoin Morgan, who had played for Ireland until 2009 before opting to represent England. Morgan hit an atypical, watchful 45 from 37 balls to get his adopted country out of trouble from 32/3.

Niall O’Brien:  “It was Eoin Morgan’s first match against us for England, and he played very well. But we had some very good plans to him at a time when other countries around the world were struggling to work out how to bowl to him. He scored at a run-a-ball but he never really got away from us.

“We tried to bowl slower balls to him, and back-of-a-length deliveries. We wanted to make sure that he could not use the pace of the ball, so that if he was going to hit boundaries he would really have to hit the ball. We wanted to make him reach for the ball, and force him to hit to the long boundary.” Morgan and Luke Wright (20 from 22 balls) were crucial in dragging England up to a total of 120-8 from their 20 overs, but T20 specialist Wright struggled in particular with the left-arm spin of George Dockrell.

The 17-year-old Dublin schoolboy had taken three wickets in the previous match against the West Indies, and had Wright in all sorts of trouble in the 15th over of the England game as the Sussex all-rounder tried to up the scoring rate. Giving the ball a bit of air, Dockrell bowled five dot balls then forced Wright into an ugly slash off the final delivery which looped in the air just beyond wicketkeeper Niall O’Brien.

Trent Johnston: “He was a very mature 17-year-old. People had not seen him before so they did not know what to expect from this tall left-arm spinner – they did not whether he had a ball that went with the arm.”

Niall O’Brien: “When you are young and carefree it is sometimes easier – when you have played cricket a number of years you can sometime start to overthink things. He came pretty much out of school, and did a really good job for us in the tournament.” The Ireland players were confident at the halfway point of chasing down a target of 121, and BBC Test Match Special producer Adam Mountford admits that the journalists in the press box expected the Irish to win the game.

Adam Mountford: “When Ireland restricted England to 120 that we were preparing for England going out of the tournament after just the two games.

“England hadn’t taken Ireland lightly after their performances in the 2007 World Cup, where they knocked out Pakistan in the group stages and beat Bangladesh in the Super Eights.

“The England players knew the Irish team, and knew they could be dangerous. And we in the BBC TMS team knew Trent Johnston pretty well – he and our cricket correspondent Jonathan Agnew had propped up the bar in Barbados one long evening!”

Collingwood admits that his side underperformed in their innings, but says England faced difficulties playing Ireland that they did not have against other full member countries..

Paul Collingwood: “We did not underestimate Ireland, but the preparation is slightly different playing against an associate team.

“We had the video footage to look at, but we didn’t have that experience of playing them that often. It is a crucial factor, because when you play against individuals on a regular basis, you get to know all their strengths and weaknesses. “We had to wing it a little bit.”

During the ten-minute innings break the skies above Providence grew darker, and the Irish players began to fear the worst, knowing that a no-result would see Ireland eliminated on net run rate.

Niall O’Brien: “We were getting the radars, and we were apprehensive. We did worry that the poor weather would come, and our plan was to get as many as we could before the rain came, to try and get ahead of the Duckworth-Lewis rate.”

The players came off for rain just two balls into the Ireland reply, prompting England head coach Andy Flower to slam his desk in frustration. When the rain eased and the players came back on, the dark clouds still lingered. O’Brien hit two boundaries before the heavens opened again in the fourth over, and that was the final play of the day. The Ireland innings was over at 14-1 from 3.3 overs, the game was over as a ‘no result’ and Ireland’s tournament was over on the net run rate. Niall O’Brien:  “I genuinely think Ireland would have won that game. Not with ease, but I think we would have chased down the total and progressed. But it was not to be. And it would be foolish of me to suggest that we would have gone on to win the tournament, but we gave England a bit of a scare.”

Adam Mountford: ” I interviewed Paul Collingwood at the back of the dressing rooms after the game, in a tunnel between the nets and the dressing-rooms, and we had difficulty finding anywhere to avoid the rain.

“He said that England were unbelievably relieved - he said that they were checking the rain charts and they felt themselves really fortunate to get through.”

Paul Collingwood: “I think I have blanked that from my memory, but yes, we were so relieved to get through.

“Ireland were in with a good chance of winning the game, as it was only a run a ball, but it wasn’t the easiest batting pitch, and we had a fantastic bowling outfit.

“That was an England team that went on a winning streak of nine games and did not concede more than 147 when bowling, which was an incredible effort. So we were confident that we could defend 120, but we were also aware that we needed everything to go our way. “If one batsman came off, it would have been game over.”