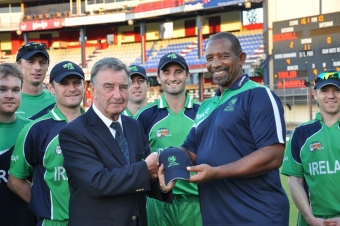 The Cricket Ireland President Robin Walsh gives us the latest update from the Irish camp in Trinidad after a tough week both on and off the pitch for the Boys in Green.

I can’t pretend it’s been the best of times since I last leapt into print on the eve of Ireland’s second game of their Caribbean odyssey.

Defeat by six wickets against Jamaica followed the equally heavy one against Guyana and ensured there can be no place in the semi-finals of the Nagico Super 50 tournament here in Port of Spain. All that remains is the third and final group match against the Windward Islands tomorrow (Friday) and an exercise in face saving. It won’t be easy against a side which just happens to be the defending champions.

No-one thought it was going to be anything but difficult, coming from cold to heat; from lack of match practice to encounter a plethora of West Indian Test players who have spent week after week in the middle. The absence of Paul Stirling and Ed Joyce hasn’t helped either - the former nursing an injury, Ed not joining the squad until the Jamaican leg and the three all-important games against the West Indies at Sabina Park.

The two defeats have, of course, been overshadowed by the concern and sympathy felt for John Mooney who has been forced to return home as a result of a stress-related illness. As Warren Deutrom put it so aptly in Cricket Ireland’s news release : “John is an incredibly passionate cricketer who has performed with distinction for Ireland over more than a decade. Cricketing matters must come a poor second where health issues are concerned.” John is missed and continues to be in everyone’s thoughts here.

++++++
Yet there were moments of celebration. Two in fact as the blazer was called into action during the Jamaican game to make special presentations to George Dockrell and National Coach, Phil Simmons. George has now notched up 100 caps at the tender age of 21, a remarkable number of games in such quick order but, then, that’s the nature of Ireland’s international roundabout. It could not have been more appropriate that the special cap to mark Phil’s 200th game in charge should be presented at the Queen’s Park Oval in his native city. It has been quite an experience to accompany him on his return home, a subject I shall return to before we leave the island. ++++++
The immediate past President of the Northern Cricket Union, Chris Harte, and his wife Anne broke off their holiday in Tobago to take the short flight to the game against Jamaica. A grand day out in the Members’ Lounge, despite the result. All manner of cricket subjects on the agenda, not least Chris’s beloved Bangor and Schools’ Cricket of which he has been an enthusiastic advocate and administrator down the years. However, he did spend half the day trying, unsuccessfully, to solve the quiz question posed by team manager Roy Torrens: which English Football League side’s name begins with five consonants?
Answers on a postcard, please.

+++++++
You’ll travel some before you meet a more unusual supporter of Irish Cricket than Joe Madory, born, bred and lived nowhere else but in Staten Island, New York.

His interest in cricket has developed over the 45 years he has been visiting the West Indies on holiday - sometimes as many as three times a year.  He first came across the Ireland team in Grenada during the 2007 World Cup and still sports the shirt he bought at the tournament. Trinidad - and in particular the Hilton Hotel - has long been his favoured destination and he timed his current visit to coincide with Ireland’s games here. Of course, there has to be Irish blood somewhere in the family, so meet Joe’s wife Kathleen (nee O’Callaghan) whose father emigrated as a young man to New York from Ballyhaise in Co Cavan.

The couple were honoured guests at the tournament’s opening ceremony and found common ground with skipper William Porterfield.  It seems Joe knows a number of the same name in Staten Island and it seems that some of William’s ancestors emigrated to that neck of the woods way back when. So there!

++++++++
Joe and I will have had birthdays out here - mine today, his this day next week.  We both agree it would be nice if the Ireland team gave us a present.  Victory over the Windward Islands tomorrow would do the trick.