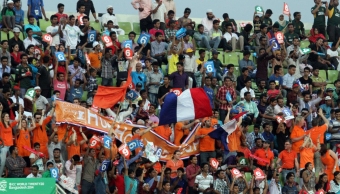 Cricket Ireland President Robin Walsh writes his ‘port-mortem’ from Sylhet following Ireland’s exit from the 2014 ICC World Twenty 20 after the loss to the Netherlands on Friday.

It’s the diary entry I dreaded writing, but needs must. It’s now less than three hours since the disaster and the players are back in the hotel,  packing to fly home first thing in the morning.

The bolt from the blue which saw the Dutch shatter a series of World T20 records has left the entire squad devastated and their dream of a Super 10 place in tatters. The dressing room after the match was not the place to be: there is a time to say nothing, simply shake hands. Two comments stick in the mind after the Dutch had quite astonishingly chased down a required 189 in a maximum of 86 balls to clinch run rate qualification. The first was from match referee David Boon, himself no stranger to the boundary rope in his Australian heyday. He described it as the most brutal and sustained pieces of clean hitting he had ever seen.  Team manager Roy Torrens has seen a thing or two in an international cricket and soccer career of highs and lows, including defeat in an Irish Cup final with Ballymena United.  He described it as the most shattering experience of his sporting life.

If there is any consolation it’s to be found in the magnificence of the Dutch performance and that an Associate had squeezed past a Test country that is Zimbabwe.  I would prefer not to have had to congratulate their team manager Ed van Nierop and Man of the Match Stephan Myburgh (63 runs, 23 balls, 7 sixes) but I did so sincerely.  It was their day and deservedly so.  These things happen once in a blue moon: remember Kevin O’Brien in Bangalore. Most of the packing done as the players begin to emerge in ones and twos for a beer and a bite.  India are playing Pakistan on the big screen in the first of the Super 10 games and only serves to rub salt into the wounds.  What might have been indeed.  No sign of the Dutch:  thankfully they are doing their celebrating in a private bar elsewhere in the hotel.  For the Ireland players there was little inclination to make a night of it.  Late nights and long flights don’t mix.

Lots of sad sights as players wheel out their baggage. Instead of a quick flick to Chittagong, it’s to Dhaka for an overnight, the same again tomorrow night in Dubai before the final leg to Dublin or London on Monday. Time to say farewell to the squad as I stay behind to welcome the women’s team for their four group games in Sylhet. Thought it appropriate to don the blazer for a final handshake and a last word on the coach. I said they’d been struck by lightning but we all know lightning doesn’t strike twice. And I thanked them for helping to make the past year one of the happiest of my life. Touch emotional.

Change of hotels across town and it’s really good to greet Isobel Joyce and her team mates whom I’d not seen since I’d flown with them from Dublin to Dhaka a week ago. They look pretty fit under the Trent Johnston/Mark Lane regime and relaxed into the bargain after two promising warm-up games against Sri Lanka and India in Dhaka.  They may have lost both but it’s all going in the right direction with a highly competitive 27-run defeat against the Indians.  Clare Shillington led the way with the bat, hitting 47 in a total of 121 for 9 in the 20 overs.  Earlier India posted 148 for 4 with Lucy O’Reilly stemming the flow of runs late on and claiming the wicket of top scorer and star bat, Mithali Raj, into the bargain.  Something else the 14 year-old will prize for years to come - a bat presented to her by David Warner when the team was sharing the same hotel as the Australians in Dhaka. Wicket keeper Mary Waldron didn’t come again empty handed either - a pair of keeping gloves courtesy Brad Haddin, thank you very much.  More than a coincidence that the coach is an Australian. Watched the first of the games on the telly last night in the Super 10 group that might have been Ireland’s. Didn’t ease the pain.  But it’s another day and another adventure as the women prepare for their first practice in Sylhet on the eve of their opening game again New Zealand. As Cricket Ireland’s Performance Director, Richard Holdsworth, informed BBC Radio Ulster in an interview from here last night,  Ireland is the only Associate country to have both men and women’s teams in Bangladesh. Worth noting.