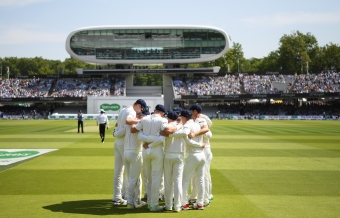 Ireland last played at Lord's in 2019

DUBLIN – Ireland Men’s cricket team is set to return to Lord’s for a Test match against England Men, the England and Wales Cricket Board has announced today as part of its home summer programme reveal.

The four-day Test match will be played between 1-4 June 2023 in a highly anticipated return four years after the memorable first Test between the two sides at the Home of Cricket.

There will also be a three-day warm-up game for Ireland to be played from 26-28 May with details to be announced in due course.

“As a player, there’s no doubt that Test cricket is the absolute pinnacle of our sport. We were fortunate to play a Test against England at Lord’s back in 2019 – which was a memorable occasion for players and fans alike - so the news that we will be returning to play at Lord’s next year is very welcome.

“That match against England in 2019 was the last Test we have played, so we are excited to be returning to play the red-ball game next year. It’s one of four Test matches we are scheduled to play in 2023, which is so important for such a relatively young squad. There is no better place to really learn, develop and test your game as in multi-day cricket.”

“Without doubt, Lord’s is a very special place for any cricketer to play and we are delighted that Irish cricket will once again be centre stage in a Test at the Home of Cricket. The Test we played there in 2019 was a memorable occasion and, for me, the Ireland team playing against that opposition, in that format, at that venue exemplified everything about our then new Full Member status.

“While the action on the field at the Lord’s Test in 2019 was compelling, I have to say that just as compelling were the fans. We saw a full house for three days, with the vocal and celebratory atmosphere created by the Irish fans making the match truly memorable. Indeed, we learned afterwards that about half of the fans at that match had never been to Lord’s before, while the TV audience was among the highest ECB had for any Test opposition that decade outside of India and the Ashes. We hope to see many returning and new fans lining up for this next Test, supporting the boys in green and showing not just that Test cricket has a vibrant future, but that Ireland is a worthy addition to its ranks.

“Equally as important to our season next year will be the three ODIs in September at three iconic English grounds. Our thanks to the ECB for their support in arranging these fixtures – they make 2023 a very enticing season for Irish fans.”