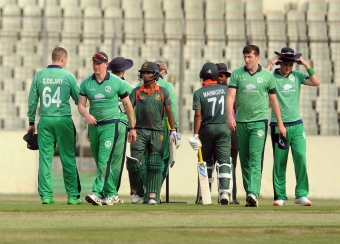 Over the course of the past two-and-a-half weeks the squad played a four-day match, four 50-over encounters (a fifth was abandoned part-way through the match) and a one-off T20 game against the Bangladesh Emerging XI – a number of whom were part of the Bangladesh Under-19s side that won the Under-19 World Cup in South Africa last year.

While the Wolves went winless on tour, there was plenty to take away from their time in the subcontinent – and much for Head Coach Graham Ford to consider.

The tour was a chance for every member of the squad to gain valuable match practice in foreign conditions, across multiple formats, to provide exposure to conditions and teams that they would face in the years ahead.

Nine members of the squad had recently featured as part of the senior squad that travelled to Abu Dhabi in January. For Stephen Doheny, JJ Garth, Graham Hume, Jeremy Lawlor, Ruhan Pretorius and Ben White though, it was an opportunity to benefit from time with the Ford and his Assistant Stuart Barnes, and to test themselves in an unfamiliar environment. With marquee series against South Africa and Zimbabwe coming up this summer and a T20 World Cup in India later in the year, the tour was also a chance for players to put their names forward for consideration at the senior level – or, in the case of Hume and Pretorius, it was an opportunity to showcase what they can offer Ford and his staff when they qualify for Ireland in 2022.

In the five-match One-Day series, Pretorius was the top-scoring Wolves batter with 142 runs, including a high-score of 90 – falling 10 runs short of a second List-A century. He also claimed five wickets with the ball and looked impressive in every facet of the game.

Meanwhile, Hume, who had previously played in this part of the world, impressed particularly in the four-day fixture, taking 3-56 and extracting pace and bounce at times out of a batting-friendly pitch.

Lorcan Tucker reinforced his credentials in Irish colours - the 24-year-old wicketkeeper scored 123 runs in the one-day series, including a splendid 82 not out off 53 balls in the 3rd one-day match. Having impressed with the bat during the senior tour to Abu Dhabi in January, it was positive to see Tucker taking this confidence to the subsequent tour. Image: Lorcan Tucker hits out during his 82*

Despite only taking two wickets in the One-Day series, leg-spinner Ben White showed promise - bowling with control and at a decent economy rate – conceding just 4.60 runs per over in the ODM leg of the tour.

Equally positive was the leg-spin of Gareth Delany, who claimed five wickets on the tour, with a best of 2-52. Delany featured for the Wolves two years ago on the Sri Lanka tour, and he increasingly looks more confident with his game. Delany, White and JJ Garth formed a trio of leggies that should be better for the experience here in Bangladesh.

The seamers had a tough time given conditions, however Adair, Pretorius and Peter Chase had periods of dominance throughout the series – with Adair ending the tour as the top wicket-taker with nine dismissals, and a best of 3-22. His economy rate of 3.53 across six matches underscored his value to the national side when he gets the opportunity.

Having examined the bowling unit up close for a month, Stuart Barnes should have learned a lot from the tour and will undoubtedly have a list of areas of improvement that could be made. changing tactics to seek a breakthrough at crucial times, building sustained and disciplined pressure, and death bowling will undoubtedly be areas on that list.

On the batting front, while there were moments of individual brilliance and reasons to cheer, there were occasions where the batsmen struggled. Captain Harry Tector on several occasions commented on the side’s run rate and that the top order perhaps faced too many dot balls early on, leaving too much work to do at the back end. Image: Ruhan Pretorius on the way to 90 - the top score on tour

Building partnerships are key, particularly in the longer forms of the game, and this was an area that at times was lacking. The old adage of ‘one wicket often brings two’ came into play far too often which unsettled the side and dried up the run-rate after solid starts.

Saying that there were definite positives to be taken from the batters on the tour. Four batters made half-centuries – Doheny, Tector, Tucker and Pretorius – with Doheny topping the run-scoring charts (192 runs) and Tucker topping the batting averages (37.20).

James McCollum hit 41 and 40* (retired hurt) in his two ODM innings, however, suffered an unfortunate end to his involvement on tour with a tweaked hamstring.

Tector’s gritty 55 in the second innings of the four-day match showed what applied discipline could achieve, and one only wonders how they could have played out if there was a second four-dayer, as was the case in Sri Lanka in 2019.

One other batting note was the elevation in the 4th and 5th ODMs of Mark Adair to first-drop. He hit 40 from 49 balls and 45 from 62 balls in two impressive digs that showed his natural talent as a batter. He looked quite comfortable higher up the order, and may have been a useful experiment for Ford and the selectors to file away for the future.

While winning margins at times looked comprehensive, in the white-ball formats the Wolves had periods in each game where they were highly competitive – even in the abandoned first ODM the Wolves had the home side at one point at 74-4 from 21 overs and looking decidedly shaky.

However, perhaps the overall takeaways from this tour are the need to further develop that killer instinct – to learn to better take control of games when on top, and to ensure a disciplined bowling line at the death. Easier said than done, admittedly, and the squad cannot be faulted for effort. For some players, they hadn’t seen competitive cricket for many months and had arrived in a hot and humid Bangladesh straight from a cold Irish winter. Even for those who had been in the UAE in January, the climatic changes to adjust to over the last three months – cold Ireland, hot UAE, cold Ireland, hot Bangladesh – would have been testing. But that is all part of the modern international game, and in the end, that is the beauty and purpose of a tour like this. To give players that exposure and experience early, so that it is somewhat more familiar to them when they step up to the senior team.

What the tour demonstrated though, despite the results, was that there is a lot of potential in this group. Undoubtedly, once they return home and get some rest, they’ll all then be looking forward to playing for their clubs and provinces as soon as possible as we start what looks set to be a big summer for Irish cricket. Scorecards for the tour matches between Ireland Wolves and Bangladesh Emerging XI: