A tribute to Roy Torrens by Robin Walsh 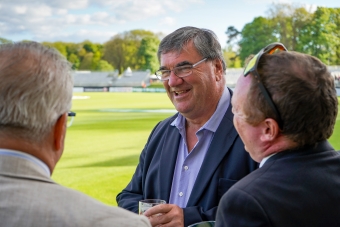 I am proud to say that Roy was my closest friend. His loss is incalculable and all our thoughts are with his devoted wife Joan, his daughters Andrea, Joanne and Judith and the wide family circle.

Simply put Roy was one of the greatest figures in the history of Irish cricket: international player, selector, board member at provincial and national level, chairman of his beloved Brigade club and Ireland president in the millennium year.

But in Roy’s own view the highlight was to be found in the 11 years he was manager of the men’s international team.

First with national coach Adrian Birrell followed by Phil Simmons and captains Trent Johnston and William Porterfield he was to manage the side at the finals of three One Day and three T20 World Cups.

On a personal level Roy was a father figure to the players, someone in whom they could confide with absolute trust.

After his retirement as manager, “Torrens Tours” became legendary as Ireland’s greatest supporter organised worldwide trips to cheer on the team. There was no shortage of fellow travellers north and south.

And no shortage of the most brilliant memories - all to be treasured. Not least was his meetings with the players he used to manage: they didn’t shake hands, they hugged.

As some sage once put it: “Memory is the only true friend that grief can call its own”.