Academy side announced for four-day fixture against Australian development side 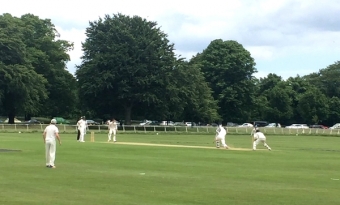 The Academy side in action against Cambridge University in 2017

Cricket Ireland has announced a strong 12-man squad for a four-day fixture against the Australian-based Future Stars side, with the match being played at CIYMS Ground from 30 July to 2 August 2018.

The Shapoorji Pallonji Cricket Ireland Academy is now in its fifth year of operation, and the senior men’s and women’s national sides have already seen the benefits of the programme. Internationals like James Shannon, Simi Singh, Peter Chase, Kim Garth and Gaby Lewis - to name just a few - have come up through the system and now feature regularly in senior national sides.

“We have chosen a young squad for this fixture with a mixture of current Academy players and others that have impressed during the season and could potentially be included in our next Senior Academy intake.”

“The Future Stars will provide a tough red ball challenge and have been in good form on their tour of the UK. Replicating a four-day Test match at this level will no doubt be a great learning experience for all involved.”

Ryan Eagleson, former Ireland international and current Performance Coach for the Academy, will coach the side, with Ian McGregor nominated as Assistant Coach.