Adair and Terry called into Ireland squad for Afghanistan series 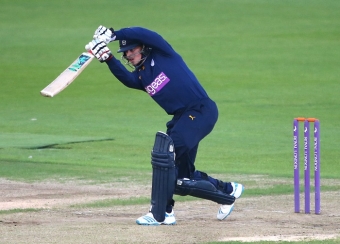 Sean Terry is one of two uncapped players in the squad

Ireland have named two uncapped players in their 14-man squad to face Afghanistan in a five-match ODI Series in Belfast next month.

Fast-bowler Mark Adair and top-order batsman Sean Terry are the two new faces in the squad, while Peter Chase and Tyrone Kane have also earned recalls.

The selectors have left out Max Sorensen, George Dockrell and Boyd Rankin from the squad that lost to Sri Lanka in Dublin last week.

Ireland Head Coach John Bracewell said:“When we re-signed Boyd back into the Ireland squad at the end of last year, the Afghanistan series was possible but unconfirmed. The likely series dates fell at a crucial time for Warwickshire, so we agreed he would not be available for the series if it was confirmed, but would be for all other major commitments in one of our busiest-ever years.

“On balance, we felt a partially-available Boyd was better than not at all. He’ll be 32 next week and there is a lot of cricket coming up between now and the end of the summer. Both parties will continue to carefully monitor and manage his workload in his best interests and longevity in the game.

“Of course, succession planning is vital so it’s an ideal opportunity for us to look at other options - Peter Chase is the logical replacement for Boyd and is currently bowling very well.

“Mark Adair has impressed me with his skills in the limited opportunities I have seen him, and the series is ideal to get him involved with our international programme.”

Ireland have opted to name an extra player for the series, and Bracewell hasn’t ruled out bringing one or two more in as the series unfolds.

“Naming 14 players - as opposed to 13 for the Sri Lanka series - gives us an opportunity to bring in batting cover and we believe that Sean Terry covers all the positions required. He showed his qualities with his recent unbeaten 251 against Scotland A. Tyrone Kane gives us all-rounder cover in the squad as we look to increase our depth in this area with the retirement of John Mooney.”

Bracewell explained the selectors rationale for leaving out spinner George Dockrell who didn’t play against Sri Lanka. “With Andy McBrine bowling so well at present and Paul Stirling an experienced back-up, we feel in the early stages of the series an extra spinner is a luxury we don’t need.  We will of course look at our spin options as the series progresses and if necessary strengthen that area.”

The first match at Stormont takes place on Sunday July 10, with the other games on July 12, 14, 17 and 19. Tickets are available to purchase here.

Fixtures: All at CSNI, Stormont starting at 10:45am.