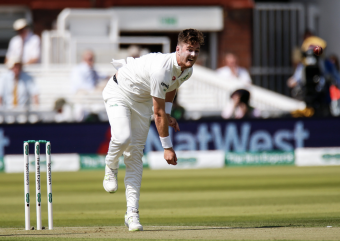 Mark Adair has been handed a Central Contract

DUBLIN - Cricket Ireland has today announced that Mark Adair has accepted a central contract until the end of 2019, becoming the 32nd Irish cricketer to receive a contract from the national governing body this year.

The contract offer caps off an eye-catching year for Adair – more than six years on Cricket Ireland’s radar, his performances during 2019 propelled him firmly into the public eye and has led directly to this opportunity.

“While most observers of the recent Test match between Ireland and England at Lord’s would probably say that the most eye-catching Irish contributions came from Tim Murtagh and Andy Balbirnie, perhaps no one did more than Mark to keep Ireland competitive. Opening the bowling, he was able to extract sideways movement in both directions at a brisk pace, and was rewarded with twin three-fors, including dismissing England captain Joe Root twice.”

Holdsworth acknowledged that Adair is not an overnight success, but has been working hard for a number of years to get to this position today:

“For those within the game it feels as though he’s been around for years, but he’s only 23. Mark came through our pathway at Ireland under 15 level, played the Under-19 World Cup Qualifying squad, and got a contract quite young at Warwickshire. His focus at the time was on trying to be a successful county cricketer as opposed to a successful international cricketer, and I guess he was not alone in this situation.”

“When he would have signed for Warwickshire, we wouldn’t have contracted a huge amount of players. We didn’t have a national academy. We didn’t have an inter-provincial first-class system. So the opportunities for Mark then were limited as they were for many others his age or a little bit older.”

“While he had snippets of success, he left Warwickshire and came back to Ireland last year. I think he may have lost a little bit of hunger for the game around that time, but he found that back and over last winter worked very hard, got a lot fitter, and started to show signs that he really wanted to play for Ireland. We didn’t contract him earlier in the season but said, ‘look, you need to earn this. You need to show the selectors that you really want this.’ And he did just that.”

“He had some good early ​year form playing in the Wolves programme and has subsequently gone on to be selected for all three formats for the senior squad. We’ve now offered him a full contract, and it’s great to see what he’s done. Mark’s attitude and approach are commendable - he’s had to fight for his place, and the benefits are clear for all to see.”

Following the signing of his new contract, Adair said:

“I’m delighted to have signed this contract – it’s hopefully the start of a new journey in my career, and vindication for the years I have put into my game. I am the first one to admit the last six months or so have been a whirlwind, but it is certainly something I backed myself to achieve, and would like to thank the many coaches and teammates who have helped me along the way.”

“The international games this year have been great, but have only left me wanting more. My thanks to Cricket Ireland for this opportunity and I truly hope I can be part of something special with the international squad over coming years.”