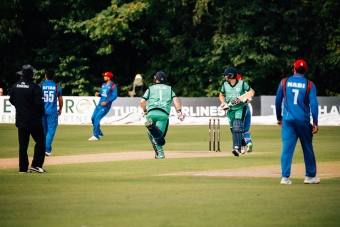 Ireland go down in tough series against Afghanistan

The Ireland Men’s cricket team fell to an eight-wicket defeat to Afghanistan in today’s third and series-deciding one-day international at Stormont.

A cool breeze and blue skies met the two teams, as Ireland and Afghanistan arrived at Stormont to battle out the decider in the current three-match Gulbahar Trophy ODI series.

After Ireland’s captain William Porterfield won the toss and chose to bat first, Ireland was immediately put on the back foot losing key batsman Paul Stirling for 2, before skipper Porterfield and the in-form Andrew Balbirnie seemed to steady early nerves.

However, with the score on 34, Porterfield fell to a juggled catch at mid-off by his opposite number, Asghar Afghan. His wicket foreshadowed a middle-order collapse, as Ireland went from 34-1 to 72-6 in the space of eight overs. Chief among the destroyers for the Afghan bowling unit were spinners Rashid Khan (3-18) and Gulbadin Naib (2-34).

For the Afghans, five of the wickets taken today were leg before wicket decisions, three of which from the bowling of Rashid Khan. Rashid’s haul of eight wickets over the three ODIs won him the Player of the Series award and underscored his importance to Afghanistan’s white ball cricket fortunes. Combined with his display in the T20I series, he once again demonstrated why he is ranked amongst the top bowlers in world cricket at present.

In response, Afghanistan’s run chase started poorly losing the early wicket of Mohammad Shahzad for 1. However, fellow opener Ihsanullah and Rahmat Shah set about scoring at a rate of better than five-an-over, bringing up the Afghanistan 50 in the 9th over. Shortly after this milestone was achieved, Ireland’s Tim Murtagh claimed the wicket of Rahmat for 33, and Ireland’s fielders noticeably lifted sensing a distant and unlikely victory was possible heading into the lunch break.

Returning from the break, Afghanistan’s batsmen had obviously decided that a confident and attacking mindset was needed and they set about finishing the match in quick fashion. They did not lose any further wickets as they posted 127-2 in 23.5 overs. With that went the series, and Afghanistan came away deserved 2-1 winners.

“We knew, looking at the first two games, that we needed to get a good total on the board – it was never going to be a high-scoring affair. Losing those three [early] wickets in the space of a couple of runs put us on the back foot. We knew from there we’d have to play well to get back into it and Kevin [O’Brien] and Simi [Singh] showed a glimpse of that with a good partnership.”

“We knew early on was the best time to bat on a surface like that, and that it would slow up as the game went on, but we just didn’t get enough runs to provide a challenge.”

“Any series between these two sides are generally close – it’s typically our batters against their spinners, and their batters against our seamers - and whoever wins that battle comes out on top in that game. That’s been the same for the last four series, and will be the case moving forward against Afghanistan, especially looking towards February and March when we’re going away to play them.”

Ireland and Afghanistan will face each other next in February/March 2019, which will include a series of matches including five ODIs, three T20Is and an inaugural Test match between the two sides.