Afghanistan take 2-1 lead with one match to play 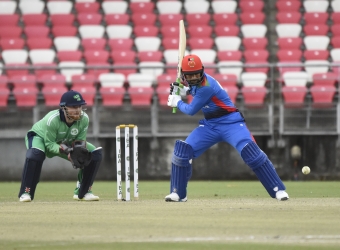 DEHRADUN - Afghanistan beat Ireland by 109 runs in the fourth ODI to go 2-1 up in the series with one game to go.

Despite Afghanistan crashing to 81-6 in the first innings, half-centuries from Asghar Afghan, Mohammad Nabi and Rashid Khan guided the hosts to a competitive total of 223. Aftab Alam then starred with the ball, collecting figures of 4-25 to take Afghanistan to a comfortable win.

Ireland once again produced a tidy all-round bowling display, with James Cameron-Dow’s 3-32 the highlight, but they perhaps lacked the cutting edge to deliver the knockout punch while the Afghans were floored.

While Afghanistan’s lower-order rebuild led by Nabi and Rashid deserves high praise, Ireland would have gone into the interval knowing they had possibly let a great opportunity slip.

Chasing 224 for victory in the second innings, William Porterfield and Paul Stirling shared 31 for the first wicket, before Porterfield fell leg before wicket to Alam, quickly followed by centurion of the last match, Andy Balbirnie for a duck. Stirling went a run later to leave Ireland at 33-3.

Simi Singh and Kevin O’Brien steadied the ship with a 33-run stand, but when Singh was bowled by Rashid Khan, it prompted another mini-collapse, with George Dockrell – another who showed fine form during the previous match – and Stuart Poynter not lasting long, bowled by Gulbadin Naib and Aftab respectively. By the 30th over Ireland were 90-6 – a similar position Afghanistan had found themselves in a few hours before.

But did the Irish have the same lower-order firepower to fuel a comeback? There was of course hope while O’Brien remained, with Ireland surely taking some heart from the incredible Balbirnie-Dockrell stand in the third ODI, but it was a big ask against a classy attack. It wasn’t to be. Rashid removed McBrine caught and bowled, before the impressive Alam, bowled both O’Brien and Tim Murtagh during the next over.

It was fitting that Nabi grabbed the winning wicket, with his excellent half-century in the first innings supplemented by a brilliant bowling economy rate of a meagre 2.40 in the second.

Earlier, having won the toss and elected to bowl, Ireland’s bowlers started brightly. Off-spinner McBrine got one through Hazratullah Zazai’s defences, but not before being hit for two stupendous sixes over long-off. Veteran Murtagh got in on the act courtesy of a stunning catch by Dockrell, as Afghanistan limped to 23-2.

Afghanistan’s middle order regrouped before Asghar signalled his intent with a six over midwicket off Murtagh – he was done playing the patient game. At 54-2 at the ten-over mark, Boyd Rankin was thrown the ball and wreaked havoc right away, nabbing Rahmat Shah via a feathered inside edge.

McBrine then found the edge of Ikram Ali Khil’s blade, before the impressive James Cameron-Dow removed both Gulbadin Naib and Najibullah Zadran in quick succession, courtesy of an lbw and caught behind respectively.

The outlook looked bleak for Afghanistan at 81-6 but they regathered as they so often do, with Asghar going on to post his second half-century in successive games and Mohammad Nabi eking out every ounce of his experience and quality.

Nabi only struck five boundaries during his 85-ball 54, but both he and Rashid Khan, who made a 58-ball 52 from No.9, combined to propel Afghanistan to 223.

“Coming into the game we were happy where we were at. But today quite a few individual errors cost us with the bat in that chase - if we can negate a few of those then we put ourselves in a decent position to come home strong.”

“I’m sure on another day a few of those that crept past the edge - if you got a little scratch on those - they would have been bowled out for a lot less. They’ve got a deep batting line up and it would have been nice to have gotten them out for a few less. I’m not overly concerned how we approached with the ball, it was more how we handled it with the bat - if we just cut out those individual mistakes it would have put us in a lot better position.”

Asked about the spin attack led today by James Cameron-Dow and Andy McBrine:

“They both bowled very well. JCD in the last few games, well he’s just growing every game. And Scra [Andy McBrine] continues to do what he does, there’s no fuss, he just goes about his business. The two lads bowled very well, along with Dockers and the two big lads. They were,a bit unlucky not to bowl them out for less.”

Asked about how he saw the Irish team’s approach between now and the final game, he said:

“While there is not a lot you can do in one day - you can go in the nets and get yourself feeling good - but we’ve just got to approach the game like we have done every other game in the series. We’ve lost one and bounced back, we’ve now just got to bounce back again. If we can negate a few individual errors over the 100 overs then we’re not far off.”