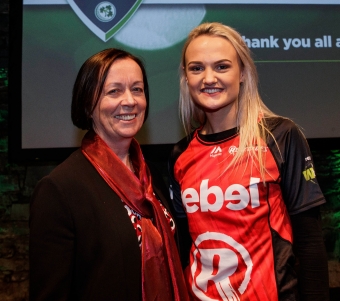 Cricket Ireland, and agri-technology company Devenish, have teamed up to support an Ireland Women’s Overseas Player Development Scholarship Programme for 12 months initially, with an option to extend beyond. The exciting initiative will help forge the next generation of Irish cricketers to broaden their international experience as they strive to continue to build on their impressive performances in recent years.

“It’s great news that Devenish has come on board,” said Cricket Ireland Head Coach Aaron Hamilton, “This fantastic deal will assist greatly in the development of our players, helping them take their talents abroad, playing cricket in different countries, experiencing a wide range of conditions and cultures.

“These career enhancing opportunities will not only help the individuals grow and improve as cricketers but also as people.

“Their experiences will help enrich not only themselves, but also their team mates in the squad, as they bring back and share them into the Irish system.

“Earlier this year we saw Hanley Energy come on board as the Team sponsor, this continued investment in women’s cricket in Ireland can only lead to great things for this squad as they go on to face tougher and more experienced teams in the coming years.”

“We are delighted to support Cricket Ireland. Devenish is deeply rooted in agriculture, with nutrition, health and performance being at the heart of our business. We hope that this partnership will help to create an awareness around the importance of sport and good nutrition for health and performance, and will support our cricket team in competing successfully. We wish the team every success and look forward to this exciting new partnership.”

Ireland Women have an enviable track record of blooding young players in the senior ranks having four of the youngest internationals in Lucy O’Reilly, Gaby Lewis and Louise Little who debuted as 13 year-olds, while Kim Garth was just 14.

Lewis – a double winner at the recent Cricket Ireland Awards will be one of the first to take advantage of the programme, when she travels to Australia later this year.

“This Player Development Programme is a massive forward step for women’s cricket in Ireland,” said Lewis. “It provides the opportunity to train and learn at a higher level accessing top-class facilities in a competitive environment.

“I’m extremely grateful to Devenish Nutrition to be one of the first beneficiaries of this programme as I head to Australia for a number of weeks. This initiative will help expand the numbers who are able to travel overseas for the winter and this growth can only be good for the Irish game.

“I can’t wait to bring back all the learnings and share them with my teammates, across club, national and representative cricket,” added Lewis.

Lewis will join a quartet of Irish internationals that are currently playing in Australia this winter with Isobel Joyce, Ciara Metcalfe, Mary Waldron and Kim Garth all involved at various levels on and off the field.

Garth was a member of the Sydney Sixers side who won the Big Bash title earlier this year, while Joyce also played for Hobart Hurricanes in the competition. Metcalfe is enjoying a player/coach role, while Waldron has earned widespread plaudits for her umpiring capabilities after being sidelined with a knee injury.