All-rounders Adair and Getkate star in Knights win over Reds 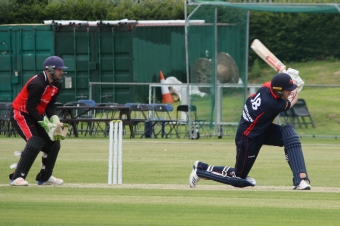 Getkate struck 49 today, following it up with 4 wickets

The Northern Knights have continued their unbeaten run at the Test Triangle Inter-Provincial T20 Festival by beating a gutsy Munster Reds side by 32 runs at Pembroke today.

After winning the toss and electing to bat, the Knights openers started sprightly, putting on 25 from the first 15 balls, before James McCollum fell for 16, which included two big sixes.

Despite the loss of partners, fellow opener Shane Getkate was in ominous touch, pounding the ball to the fence, and over, in an entertaining innings of 49 from 38 balls. He fell to a good outfield catch by Yaqoob Ali looking to bring up his half-century with a maximum.

When Getkate fell the Knights were at 106-5 in the 16th over - it looked as though the Reds may get back into the game if they could bowl tightly in the final stretch.

However, it wasn’t to be as Greg Thompson (37* from 20 balls) and Mark Adair (33 from 12 balls) put on a 61-run partnership from 25 balls - Adair falling from the final ball of the innings seeking his fifth six.

Looking at 168 for victory, Munster Reds started solidly, taking their opening total to 30 without loss in the 6th over, but the in-form Getkate struck three times, removing Cormac Hassett (17), Jack Tector (14) and captain Jeremy Benton (21).

Getkate bowled a niggling line and length and finished with 4-27, taking his wickets total to 9 wickets from the last two T20 matches.

Stephen Doheny tried to pull Munster back into the contest with a commanding 35 from 30 balls, but wickets falling and a slowing run rate meant the target was too much.

A clatter of wickets at the end saw Mark Adair finish the match with 4-22, and the Reds were dismissed for 135 with two balls remaining in the innings.

The end of the match saw rain drops fall, which looks set to delay the second T20 match today between Leinster Lightning and North West Warriors.