All Systems go for Interpros 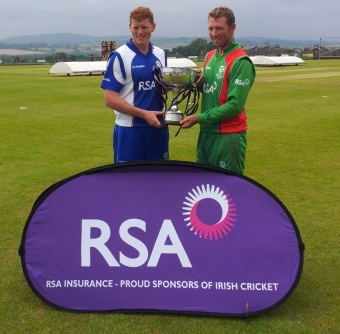 The Interpros are finally back. After disappearing for a number of years, 2013 sees the reintroduction of top level domestic cricket in Ireland with the Northern Knights, North West Warriors and Leinster Lightning competing in Twenty20, One Day and Three Day competitions.

Cricket Ireland Performance Director Richard Holdsworth explains why the Interpros are so important. “One of the major things that came up in the domestic review was the gap in standard that exists between International and club cricket. Players are chosen for national teams straight from club cricket and it’s a huge step up. If we want to play at the highest level we need a bigger player base playing at a higher level.”

One challenge facing Cricket Ireland is the possible effect on club cricket. “One of the requirements for players in the three teams is that they are playing club cricket. We centralised the fixture list so there are no clashes with any of the premier cricket in any of the Unions.”

So how does it work? Who picks the teams? Who gets contracts and what do they entail? “The National Selectors will chair the selection committees of their own Union and the respective Unions will appoint the other selectors,” says Holdsworth. “The selectors, along with the coach, will choose their own players and decide who they give contracts to. Each Union can award up to 16 contracts including any Cricket Ireland contracts already awarded - although they don’t have to award all 16.

“The contracts don’t involve regular remuneration but players will get the same kind of support the senior men do with strength and conditioning, gym memberships, coaching support and support from a performance analyst. They will also receive match fees.”

There are conditions that have to be met by players to be eligible for a contract, though. “Players have to be qualified to play for Ireland under ICC regulations and must be playing for an Irish club in one of the five Unions whenever selected. There are exceptions for players who used to play and reside all-Ireland but have moved to the UK. We wanted to avoid a situation whereby players were being brought in from elsewhere. That being said, it has been agreed that up to two players that are non-Irish qualified can be chosen for the Three Day games. These could be people who are close to qualifying or who can mentor younger players successfully and bring something to their team.

“The Interpros should be a pathway for players who want to play for Ireland, but that being said we want the best players playing. If that means that maybe players retired from International cricket, for example Nigel Jones and Albert van der Merwe, are picked and can add something to the squad, then they could be involved.” With this being the first year of the Interpros, it’s all about getting Irish cricket fans excited about a new competition. Cricket Ireland want to get people down to the matches and begin to create a brand that people will want be a part of. “The Unions themselves went about creating team names in various ways and asked for feedback from their members through internet polls and things like that. O’Neill’s will sponsor the kit and we have already had people asking where they can buy the shirts so that’s a great sign,” said Holdsworth.

“We want to get kids down to the games and bring cricket back to what it has traditionally been in this country - a family game. These matches should be something that the whole family wants to go to and we will hopefully be able to create an atmosphere that does that.

The budget for this year has gone into the competition structure and operations which means that development officers and the three new team administrators appointed to the three participating Unions will have to work hard to generate excitement around the games. “Development Officers and the team administrators will have a big job to encourage youngsters to come down to these games. They will go into schools and organise activities like the RSA Get-into-Cricket programme and Kwik Cricket for the intervals between matches and innings. It will be challenging but hopefully rewarding as well.”

Only three Unions are taking part in this venture, what about the other two - Munster and Connacht? “We did consider a larger a competition but the players are not there yet in the other two unions. All of the teams need to be playing at a high standard for this venture to work and we didn’t want to go too big too soon,” admits Holdsworth.

“Right now Munster and Connacht need to focus on participation and they are doing good work in that area. They need to build a bigger player base and only come into the Interpros when they are ready. It may be a case of bringing them in bit by bit and, perhaps, in a few years Munster can enter the Twenty20 competition with a view to easing them in to the other competitions later on. Connacht are a bit further away and should be thinking more long term.”

Cricket Ireland were assisted in setting up the new-look Interpros by the ICC’s TAPP - Targeted Assistance and Performance Programme - and were able to appoint Cricket Operations Manager Simon Dyke to oversee the running of the three competitions.

“Simon has 10 years experience with Sussex and has worked with the MCC and volunteered at the Olympics for six months. He has great experience and he will be taking over a lot of the day-to-day responsibilities from me,” said Holdsworth with a sigh of relief.

“Dyke will head up the Interpro working group which will constantly review how the competitions are going. There are bound to be teething problems, we know there will be, but hopefully we can sort those out as they come up.”

All three Unions will announce their player rosters on the same day, but if a player is not picked up by their own Union, they are free to play for one of the other two. “There will be a player transfer system,” confirmed Holdsworth. “This can be either Union or player driven. For example, if one Union has three top wicketkeepers and only two of them are contracted, the third keeper can approach one of the other two Unions about possibly playing for them. Or if one team is short a spinner, say, or a fast bowler, they can look outside their own Union. However, the home team has first pick of any players in their own jurisdiction.

“Players don’t have to be contracted to be picked to play, either. If someone is doing really well in club cricket they can be called up at any time. That’s why we are introducing a scouting system.

“We are going to advertise for scouts across the country, people who watch a lot of club cricket and know what they are talking about. Cricket Ireland are going to try to get more people involved and use the expertise of the many very capable people around club cricket.

“They could be asked to look at a few players and tell us something about them or they could be asked to watch something specific, like how does a certain player do facing spin?  Are they athletic? How are they against the short ball? Stats can only tell us so much, can only go so far, so we are looking to create a network where more information can be gathered more easily.”

It’s all systems go as Cricket Ireland and three of the provinces launch into a new era for Irish domestic cricket - it certainly is an exciting time to be a young cricketer in Ireland. James Shannon was Man of the Series last year