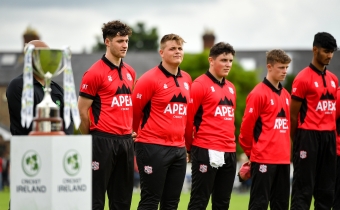 CORK – The Mardyke in Cork is the venue for the Clear Currency All-Ireland T20 Cup finals this weekend – an entertaining doubleheader awaits fans with CSNI playing Merrion in the Women’s final at 11am, followed by local side Cork Harlequins taking on CIYMS at 3pm.

For the first time ever prize money is on offer for the finalists, with the winners of both titles taking home a cheque for €1,000 while the runners-up will receive €500.

Also on offer, the winners of the Men’s competition will represent Ireland at next year’s European Cricket League (ECL) in Spain.

Fans unable to attend will be able to watch both matches on livestream (details below). The Women’s final will get underway at 11am with Belfast’s CSNI against Dublin-based Merrion. Merrion came through a tough Sprint Coatings Senior Cup competition in fine style, beating Clontarf in the final, helped by a 149-run partnership between Leah Paul and Rebecca Stokell. They will be very formidable opposition for CSNI, however, Merrion will be without Leah Paul for the final on Sunday as she’s away with the Ireland Women’s international squad for their upcoming three-match ODI series against The Netherlands.

Rachael Thomas, captain of CSNI, knows they are facing a tough challenge:

“We’re really looking forward to Sunday and can’t wait for the brilliant opportunity that it’s going to be. After reaching the semi-final of the competition last year we wanted to take it a step further this year. and to achieve that is fantastic. We’re looking forward to the challenge of playing at an unfamiliar ground against a team who we’ve never played before, and we’re looking at this as a great experience for the whole team, regardless of the end result.

“We are under no illusions that the standard of cricket that we’ll be facing on Sunday will be a level above what we’re used to facing. We know that numerous Irish, international players past and present are part of the squad, and although some will be in the Netherlands, it’ll certainly be a strong side that we will come up against, but we’re very much looking forward to the challenge.

“We are very much the underdogs for Sunday’s game, but just in reaching the final we’ve already hit the target that we’ve set ourselves for this year and so anything above and beyond that will just be a bonus for us. That said, we are a very competitive bunch, and we will certainly give the match are all. For a Belfast team to win All-Ireland would be absolutely incredible, showcasing the improvements and the developments that’s been made in women’s cricket across the NCU as a whole.

“Our squad on Sunday will be the same squad that contested the semi-final. We’re delighted to be carrying that same team through, drawing on the experience that we gained playing together in the that game, and throughout the season so far.”

“We’re very excited about the final on Sunday. Obviously, this is only the second year of the women’s All-Ireland T20 Cup competition, but having lost the Leinster final last year in a very tight game against Pembroke to miss out on this competition, it was great to get over the line this year.

“We came through a difficult Leinster draw - we had YMCA in the semi-final, which was probably our toughest game. They had some big names involved, but we played well and were able to get across the line.

“Obviously playing in an All-Ireland final is exciting - it’s been part of the men’s game in Ireland for a while now, and the fact that it’s coming in for the women’s teams is super exciting, and will help to grow the game all around the country. It would mean a huge amount for our club to win it.

“We know a bit about our CSNI opponents, a couple of them have played for the Dragons in the Arachas Super Series this year. Having brought in the Dragons as the third team, with the players predominantly based up north, the likes of Jess Mayes and Ali Cowan will be definitely two to watch.

“Unfortunately, we’re missing Leah Paul and Rachel Delaney, as they’re away on Irish duty, so they’re quite a big loss for our team. However, we have a lot of youth internationals coming through, so we’ll still have a good team out for Sunday.” In the Men’s final, which starts at 3pm, Belfast’s CIYMS will travel south to play the hosts Cork Harlequins. Harlequins were finalists in 2021, but lost out to Brigade by just 8 runs in a thrilling contest. They will be hoping to make up for that defeat this time round. In their semi-final Harlequins fought back from losing 3 wickets in the powerplay to beat The Hills, with Brandon Kruger top scoring with a brilliant 68. Ryan Joyce (3-22) and Matthew Brewster (2-39) were the pick of the bowlers for Harlequins.

However, CIYMS are packed full of talent, with the likes of the Adair brothers Mark and Ross, whilst they also have Northern Knights’ John Matchett, former Irish international Nigel Jones, Chris Dougherty and up-and-coming youngster Carson McCullough, who had an excellent time with the Ireland Under-17s this week, in their squad. In their semi-final win over Newbuildings last week a 108-run partnership between Dougherty and Matchett helped CIYMS to a 111-run win. Matchett also had a great time with the ball, taking 3-8 while McCullough took 2-16. They are looking to win the trophy they last won in 2019.

“It’s unbelievably exciting for the club to be back in All-Ireland T20 final again. It’s an incredible feeling for everybody in the club from the youngest player to the oldest person involved off the pitch. It has been a real team effort going forward, and going back over the years, trying get this squad together and blood them as youngsters and so on. So it’s incredibly exciting. It’s a great day for any club to be involved, especially so given that it’s in Cork.

“It’s nice to be in two finals in a row. I mean, I’m not sure if it’s been done before, but it doesn’t matter really at this stage. From our perspective, it just shows a bit of consistency in the side, and in the team, in their performance levels. It’s been a great ride and a great season so far for us and we’re just happy to be here, or our attitude will be anything can happen on any day. We’ve seen it in all levels of sport, professional and amateur sport in any level, where underdogs can come across and people can come a cropper so we’re certainly going to enjoy it, that’s for sure. No matter what, we’re going to go out there and enjoy it. We’ll be as clear as we can and what we want to do. We’ve already said to the lads about keeping things quite simple and repeating the things that have got us there and not getting ahead of ourselves.

“It would probably be the biggest achievement the club has ever had. But on the flip side of it, we’re just extremely proud of those lads who have travelled around the country, playing up in Leinster and around Munster, up to Galway, Kerry, and Limerick. They’ve put so much in this year that we’re just so proud of them all, no matter what happens. But there’s no doubt, we’ll be looking to win it and see if we can do a bit of a David-and-Goliath job.

“In team news, we will have the same squad that travelled to The Hills. We may look to bring in a couple of extra bowling options and see what kind of a pitch it is on the day. I think we’ve the batting side of it covered, we bat down as far as nine and 10 anyway, but having access to an extra seamer or spinner on the day, depending on what way the wicket goes. It will be an interesting day, one way or the other, because CIYMS are full of spinners as well and good quality bowlers. So I think it’s just one of those ones where you bring along a couple of tactical, 12th and 13th man, and see what rocks up on the day. Obviously see how the women’s game goes as well and see what the ball is doing in that.” “Hugely excited, another final and another chance to lift a trophy. It’s my first All-Ireland final and something I’m very much looking forward to.

“We’re a decent side with a lot of depth. Carson’s been going really well with the Ireland Under-17s but he’s been around this very successful CIYMS squad now for a long time and has a lot of medals already, so hopefully he can keep producing for us until the end of the season.

“It would be massive for me personally. Winning any trophy is great, but I feel All-Ireland trophies just have an extra bit of something about them. Being the best in Ireland at any level, and any sport is fantastic achievement, and winning for the club would be great.

“CIYMS have won this before, and would love to do it again for the support that we have and the guys that travel up and down the country to watch and support us. They’re certainly an extra bit of motivation for us to try and win. The Cork boys were last year’s finalists, they’ll be full of confidence after doing The Hills over in the semi-finals. I’ve crossed paths with a few of them, either in the emerging competitions or the senior Inter-Pros and I know a bit about what they’re about.

“In team news, we’ve Mark Adair who returns to the squad after being away for a few weeks – as Irish fans know, he is a good bowling allrounder, he has decent changeups and can hit a long ball. He’s always a welcome addition to the team.”

Livescoring will be available here.

Both games will be livestreamed here: Cricket Ireland Live on Livestream.

Cricket Ireland would like to thank Sport Ireland who have supported the provision of livestream services for the women’s final through their Women in Sport Streaming Grant programme.

Cricket Ireland would also like to acknowledge our sponsors Clear Currency (www.clearcurrency.co.uk) for their ongoing support of club and grassroots cricket in Ireland.