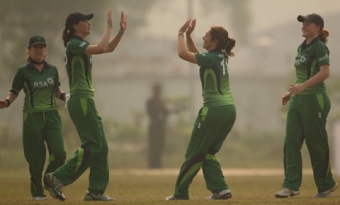 AMY KENEALY has been called up to the Ireland Women squad for their ICC World Twenty20 finals next month in Bangladesh.

The 25 year-old Leinster opening bowler replaces teenager Kim Garth who has withdrawn due to education commitments.

The 17 year-old all-rounder is currently studying for her Leaving Certificate and hopes to attend University College Dublin next year.

“It’s disappointing to lose Kim,” said National Coach Trent Johnston. “She didn’t feel able to commit fully to the pre-tournament training schedule and has pulled out.

“We’ve drafted in Amy Kenealy who has been training hard and was in Qatar for the recent international tri-series. She’s improving all the time like the rest of the squad, and it’s a great opportunity for her to shine.”

This will be Ireland’s first appearance at an ICC World Twenty20 tournament. They have been drawn in the same group as defending champions Australia, New Zealand, South Africa and Pakistan.