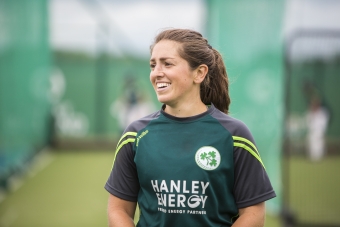 DUBLIN – Ireland Women’s Amy Kenealy has today announced her retirement from international cricket after an 11-year career with the senior side.

31-year old Kenealy made her debut against West Indies Women in 2008 at her club cricket home ground in Rathmines. Since then she has played 72 times for the national team, claiming 45 wickets at an average of 32.84. She achieved her career-best bowling figures of 4-32 against Bangladesh in 2016.

A pace bowler who often took the new ball for her country, Kenealy finishes her career as Ireland Women’s 12th highest all-time wicket-taker.

“It is with all sorts of mixed emotions I am stepping away from the Ireland Women’s international team, but this is the correct decision for me right now.”

“I would like to take this opportunity to thank my teammates, coaches and Cricket Ireland staff for every opportunity that they have given me in this amazing part of my life - from the gruelling fitness sessions on Clontarf seafront back in 2006 to the amazing Sport Ireland Institute, to playing in men’s Division 12, to opening the bowling in a World Cup in India and everything in between.”

“I can still remember that first phone call from Claire O’Leary in my leaving cert year to invite me to train with the squad – since that time I’ve given it my all, and have made so many friends and memories over this time.”

“Although it is sad to step away, I’ll keep up with the progress of the team and be there to support the girls throughout.” “As an 18-year old Amy was one of the best young bowlers in the country, so I had no hesitation in selecting her. Throughout her career, Amy was a great addition to the squad with an excellent work ethic and attitude.”

“To play 72 times for her country is a testament to Amy’s skills and abilities as a cricketer, and while we support her in her decision and wish her well, we hope that she maintains a close relationship with cricket and can be a supportive presence as we grow our sport across Ireland.”

“Too often in the sporting world we see athletes come through the system, then we struggle to retain them in the system after they call time on their competitive days. I hope Amy, and players like her, can be part of the future of the game. We know there is a growing interest in girls and women’s cricket across Ireland, and we hope to be able to utilise the talent within the game to inspire the next generation.”