May 4th 2021 by Craig Easdown | International 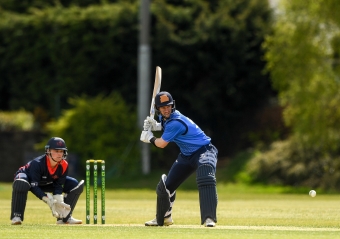 George Dockrell on his way to a century

DUBLIN – With two sixes from the final two balls of the innings, Leinster Lightning captain George Dockrell registered his first century in List A cricket and inspired his side to a 70-run (DLS) win over the Northern Knights in the Inter-Provincial Cup match today at Pembroke Cricket Club.

Starting the 50th over of the Lightning’s innings at the non-strikers end and on 81*, Dockrell struck three sixes off Ruhan Pretorius’ over – registering his maiden ton from just 84 balls. His last 50 runs coming from just 21 balls.

Dockrell had scored 51* in the last Cup match against the North West Warriors on Saturday at the same venue, and continued his good form today, hitting five sixes and eight fours. His previous best was 98* against the Knights in 2018.

Dockrell shared a 104-run 5th wicket stand with Simi Singh (38), with the Lightning recovering from a laboured start to their innings, scoring 109 runs from the last 10 overs.

Those early stages saw solid contributions from Kevin O’Brien (37) and Jamie Grassi (34), but it wasn’t until Singh joined Dockrell in the 33rd over that the momentum began to build. The Leinster side went into the innings break well placed with 251-6.

For the Knights, Graeme McCarter impressed early with 2-27 from his 10 overs, while Mark Adair’s 2-57 was a decent first run out of the new season for CIYMS man.

Earlier in the day there was drama in the second over of the match when the Knights’ James McCollum, fielding a high ball at mid-wicket, went down injured after a shoulder popped out. He was forced to leave the field and took no further part in the match.

That injury to McCollum meant Ruhan Pretorius was elevated to open with Paul Stirling. Looking for a confident start, both Pretorius (4) and Stirling (17) soon found themselves back in the pavilion courtesy of Peter Chase. The Malahide paceman finished with an impressive 3-37 and looked dangerous throughout.

Harry Tector (5) joined them soon after – the third batter in a row to be out bowled – but a rain delay shortly after led to eight overs being lost and adjusted target of 234 from 42 overs confirmed.

Debutant Luke Georgeson impressed with 46, and Mark Adair made a more than run-a-ball 36, but in the end, the Knights just couldn’t manage to sustain their innings under good bowling pressure from the home side, and were bowled out for 163-9 with 23 balls of their innings left.

The two sides meet each other again on 16 May at Comber.

The match today attracted over 182,000 views of the livestream, breaking all records for a stream of an Inter-Provincial Series match in Ireland.