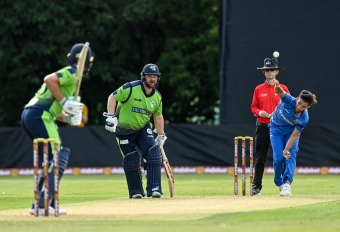 BELFAST - Ireland held on for a thrilling seven-wicket victory in the first T20I against Afghanistan, securing the result with a ball to spare.

Chasing 169, Lorcan Tucker and Andrew Balbirnie hit quickfire half-centuries before Harry Tector (25 off 15*) and George Dockrell (10 off 5*) took Ireland over the finishing line.

Afghanistan won the toss and chose to bat first, with Rahmanullah Gurbaz hitting three boundaries off the fourth over of the innings – bowled by Andrew McBrine – to get the visitors moving. Gurbaz perished in the very next over though, swatting a Barry McCarthy delivery to Harry Tector at mid-off to depart for 26.

Usman Ghani and Hashmatullah Shahidi put aside that setback to keep the scoreboard ticking along, building a partnership that took Afghanistan to 75-1 after nine overs. But Dockrell’s entry into the attack proved pivotal; the left-armer got Shahidi to top-edge a delivery safely into the hands of Paul Stirling at short fine leg for 11.

Ghani advanced to his fourth T20I half-century, helping Afghanistan past 100, but spin brought another breakthrough – Gareth Delany struck with the last ball of the 14th over, with Najibullah Zadran top-edging the leg-spinner to McBrine at backward point.

The wicket prompted a tumble in the Afghanistan middle order, with four wickets falling in four overs to leave the visitors 134-6 after 17 overs. McCarthy accounted for Rashid Khan in the penultimate over for 2, but Mark Adair took some punishment from Ibrahim Zadran in the final over of the innings, conceding 16 runs off three consecutive deliveries as Afghanistan finished on 168-7.

In response, Balbirnie looked in fine touch from the get-go, swivel-pulling Fazalhaq Farooqi from the final ball of the third over to move 19 off just 10.

Paul Stirling, playing his 300th T20, was watchful to begin with, seeing off a Naveen-ul-Haq maiden in the powerplay. But he eventually found his feet, smashing Azmatullah and Naveen for sixes as Ireland motored to fifty inside six overs.

Stirling eventually departed for 31 to Mohammad Nabi, but Ireland remained in control: Tucker and Balbirnie motored along, with the latter reaching his half-century from 34 balls at the end of the 14th over.

But Player of the Match Balbirnie then swept Mujeeb Ur Rahman straight to Najibullah in the deep to depart for 51 and, and a couple more tight overs followed to leave Ireland requiring 41 from the final four overs.

Tucker advanced to a half century from just 31 balls, but Naveen accounted for him at the end of the 18th over, leaving Ireland in serious trouble.

But Harry Tector, having started slowly, delivered a timely six off Farooqi in the penultimate over, launching the ball over deep midwicket, leaving 13 needed from the final over.

A boundary from Tector eased the pressure, and Dockrell was the man to finish the job, hitting consecutive boundaries to seal a thrilling victory.