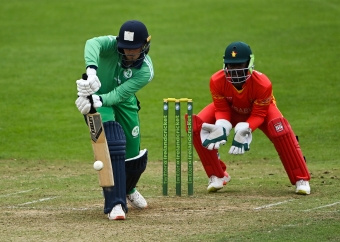 HARARE, Zimbabwe – Ireland captain Andrew Balbirnie has withdrawn from the Ireland Men’s squad after he was forced to retire hurt while batting in yesterday’s one-day international against Zimbabwe. Murray Commins has been called up as Balbirnie’s replacement.

Balbirnie had just registered his eighth ODI century for Ireland when he was struck on the helmet from a deflection off his own bat while attempting to play a low full toss from Zimbabwean seamer Brad Evans.

“Andrew Balbirnie sustained a suspected mild concussive episode after being struck on the helmet while batting in yesterday’s match against Zimbabwe. He retired hurt and did not take the field in the second innings in line with concussion protocols. He was reassessed this morning, but the decision has been made to withdraw him from the remaining two matches of this series as a precaution.”

As a replacement, Murray Commins – the Munster Reds’ 26-year old, left-handed batter – has received his first senior squad call-up and will fly to Harare today from South Africa where he is currently playing cricket.

Commins has scored 395 runs in the Inter-Provincial Cup over the last two seasons at an average of 39.50 including a century and three fifties. On Zimbabwe’s tour to Ireland in 2021, Commins featured in the Ireland Wolves team that played the tourists, scoring 60 off 88 balls.

“It’s extremely disappointing to lose our skipper in this manner, particularly after his outstanding century in his 200th match for Ireland. We all hope his recovery is quick and he is back on the park soon.

“With Andrew’s withdrawal, we have called up Murray Commins. Murray is a talented top-order batter that we see as a direct replacement – we know he has the stroke play, technique and mindset to build big scores and being left-handed, he will also add a new dimension to the top order. Given the volume of cricket coming up, this is also an opportunity to give Murray exposure to the international arena.

“We wish Murray well as he joins up with the squad this evening.”