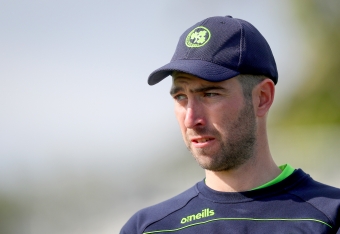 Balbirnie was a calm, stabilising presence on the field during the drama

BARBADOS – It may only be two matches into Andrew Balbirnie’s captaincy of the Ireland Men’s cricket team, but already his ability for calm, clear-thinking analysis is being displayed on and off the field. He spoke this morning from the team hotel in Bridgetown after last night’s heart-breaking defeat.

“The squad are hugely disappointed, we left pretty much everything out there. Unfortunately, we didn’t perhaps get the rub of the green at the end, but I can’t fault the lads and the effort they put in. That was what I asked from them before the game, and between innings - to go out there and make it as hard as possible for the West Indies to chase the target and I think we did that.”

“I think when you get 237 on any pitch, particular a used pitch that had been turning, then you feel in the game. I thought if we bowled with control in that first 10, and the run rate required went up, then we put them under pressure and wickets would come as they are such flamboyant players then we would get chances in the field. And when we did, we took them, and that was really impressive from the guys, that they stuck to their tasks and did what was asked.”

With the drama on the field unfolding, it was clear that Balbirnie was a stabilising presence on his teammates:

“The trick is to keep as calm as possible, because you think clearer and the skills you want to execute are easier with a clearer head. That was just the message I tried to reiterate to the bowlers, whatever ball they wanted to go with I would back, but I wanted to make sure that it was 100% the ball they wanted to bowl.”

“Doing that with a clear head was always going to be more effective than getting carried away with what was going on. With the noise in the ground I thought we did that pretty well, and all the guys who bowled at the death, particularly Sparky [Mark Adair] in the last over - he knew what he wanted to do but unfortunately on this occasion it didn’t quite come off.”

“It’s a couple days before the next game and the guys are excited to get going again, particularly now we realise how close we came to beating such a good team like the West Indies. It’s important that we recover well today - we have a short flight to Grenada, but if we can recover well, have a good training session tomorrow and get what we need done then I have no doubt we can turn around this result on Sunday.”

Ireland Men’s cricket team is in action for the third One-Day International against the West Indies on Sunday at 9am (local time) or 1pm (GMT) at National Cricket Stadium, Grenada. For Irish and UK-based fans, the match will be broadcast on Sky Sports Cricket.

The main ticketing website for Cricket West Indies is: https://www.zoonga.com/irelandtour

The skipper spoke from the team hotel this morning before the side flew to Grenada for the third ODI on Sunday.