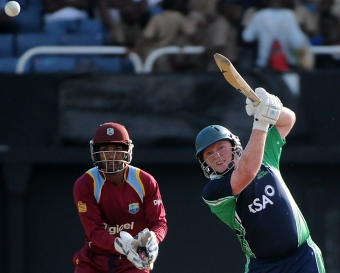 Andrew Poynter has confirmed his retirement from international and Inter-Provincial cricket.

The 29 year-old made 69 international appearances in an eight year-career, making his debut against Bangladesh A in 2008.

The Clontarf man scored 989 runs at 19.31, with his top score of 77 coming against Afghanistan during Ireland’s successful World Cricket League campaign in 2010.

“I have always found it tough to manage an international and inter-provincial cricket career whilst having to juggle running my own business, AP Sports,” said Poynter. “I’m head of youth coaching at Clontarf CC and have other coaching roles as well as a young family.

“I feel that I can still perform at inter-provincial level and scored runs this season, but I do not want to stand in someone’s way who has a dream of playing for Leinster Lightning and Ireland.

“I am looking forward to developing my coaching career - I have nearly finished my level three award and keen to move to level four in the near future. But most of all spending more time with my family with a bit less stress.

“I am so proud of my achievements in an Irish jersey, especially captaining my country and playing in two World Cups. I’ll miss the green jersey but this is the right decision for me. I’d like to thank all involved in giving me the opportunity to pursue my dream.”

Thanks to everyone over the years lots great memories and very proud of my achievements for Ireland & Leinster https://t.co/XtS0vX5oYc

Ireland Head Coach John Bracewell paid tribute to Poynter saying: “I think it’s sad that Andrew has decided to retire but I understand he’s found it difficult juggling various roles. He’s made a tremendous contribution to Irish cricket, and to Leinster Lightning in particular, where’s he has been a great influence in guiding the younger players in that set-up, and he’ll certainly be missed.

“He’s featured for Ireland in two World Cups, one of which was with his brother Stuart, which was a great moment in his life and on his cricketing cv. It’s great that he’s still keen to be involved in Irish cricket with his coaching and his sports business, and thankfully his experience won’t be lost. He was a great bloke to have around in the short time that I knew him and I wish him and his family all the best for the future.”

Cricket Ireland Performance Director Richard Holdsworth praised Poynter saying: “I’d like to thank Andrew for all his dedication and commitment to the Irish cause over the past decade. He’s played an integral role for Leinster Lightning in their first three years in the Inter-Provincial Series, and has been a major factor in their success.

“I’d like to wish him and his family the very best for his future career path and hopefully he will continue to contribute positively to the Irish cricket cause.”