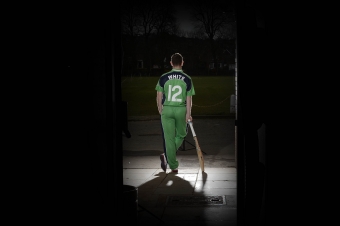 Andrew White has announced his retirement from international cricket with immediate effect.

The 34 year-old, his country’s most capped player with 231 appearances, has called time on his career after a serious finger injury ended his hopes of appearing at a third World Cup.

“It is with a heavy heart that I am retiring from representing Ireland on the International stage,” said White. “Over the last 15 years I have poured my heart and soul into Irish Cricket and to play a part in undoubtedly one of the great success stories of Irish sport has been an incredible experience.

“It had been my ambition to finish my International career at the 2015 World Cup in Australia and New Zealand in the coming weeks, however, suffering a compound fracture of my right index finger in September meant that this was unfortunately not going to be possible.”

Simply overwhelmed by the very kind words and messages on what has been an emotional day. #thankyou pic.twitter.com/zpHLXJVGX2

Making his debut for Ireland back in 2000, White showed his all-round versatility scoring 4560 runs at an average of 27.80, including six centuries, while also claiming 125 wickets at 27.63.

He was most at home in the longer format of the game, where he played an integral role in Ireland’s four InterContinental Cup triumphs.

In 26 games in the competition, he scored 1552 runs at 57.48, an aggregate only bettered by Kenyan Steve Tikolo.

White bowled the final over in Ireland’s World Cup tie with Zimbabwe in 2007, and enhancing his reputation as a ‘finisher’ scored the winning runs as Ireland beat the West Indies in Belfast and Surrey in Dublin. “Looking back on his 15 years in an Irish jersey, White reflected: “The memories and stories are plenty and to have come through the disappointing failure to qualify for the 2003 World Cup, the introduction of Adi Birrell as coach, changed the sport here forever.

“In 2007, we finally realised every cricketers’ dream to play in a World Cup. As players’, we lived the dream to the full and shared it with so many wonderful supporters, something that will live long in the memory.”

He paid tribute to the work carried out by current Ireland Head Coach Phil Simmons saying: “The team has progressed even further under the meticulous guidance of Phil Simmons and to be part of the 2011 World Cup in India and three World T20s have been extremely proud moments. Winning our fourth Intercontinental Cup Final in December 2013 was the icing on the cake.”

“There are so many people who have made my career what it has been and I would like to thank all the players, coaches, in particular, Adi Birrell and Phil Simmons, team manager, Roy Torrens, the professional support staff and the wonderful supporters who have travelled near and far.”

A schoolteacher by profession, White acknowledged the part played by his employers which allowed him to represent his country with such great distinction: “I owe a great debt of gratitude to Grosvenor Grammar School where I have been teaching for the last seven years. Their understanding and cooperation allowed me to continue representing Ireland alongside my teaching duties and for this I will be forever grateful.

“My wife, Ydele, has been a constant rock of support and encouragement and sacrificed so much over the years to allow me to pursue my dreams. Finally, my Dad, late Mum and family have always been there over the years and to share the many special moments with them has been a pleasure.” On his future plans, White revealed he hoped to remain in the game in some capacity, and confirmed he will continue to play domestically for both Instonians and the Northern Knights: “I will now take the next few weeks to take stock and try to establish what path to go down next but with my heart firmly in sport and Irish Cricket in particular, it would be rewarding to pass on some of the knowledge, experience and winning mentality that has carried this team and myself so far over the years.

“Finally, I would like to wish William, Phil and the World Cup squad all the best over the coming weeks as we yet again take on the best in World Cricket.”

Paying tribute to the role played by White for Ireland, Phil Simmons said:“Whitey has been a great ambassador for Irish cricket both on and off the field, where he has been a superb role model for the younger members of the team.

“His longevity in a 15 year career is testament to both his talent and his consistency - he rarely let his team down and it’s no coincidence that he was involved in so many key moments in Ireland’s triumphs over the years.

“I’d like to thank him for his efforts over an illustrious career, and wish him and his family all the very best in the future.”

Some of the tributes to Andrew from players past and present:

Congrats to my old roomie @Whitey631 on a fantastic career. A wonderful servant to @Irelandcricket. #great memories #legend

Congrats @Whitey631 on a top career. Great effort. Who's going to finish off the tail now? All the best

Congrats to @Whitey631 on a superb career, real pleasure to work with..will miss the dodgy banter..back to school on Monday Whiiiittteyyyy..

Congrats on a brilliant career @Whitey631 for @Irelandcricket sad to see another of the old guard moving on. You'll be missed

Congrats on a fine career @Whitey631  Set the bench mark! Look forward to doing battle over the summer and you sledging my batting!