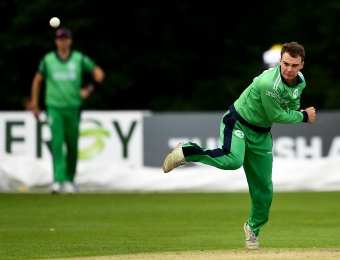 With a Test debut and eye-catching performances with the ball against Afghanistan in Belfast last month, Donemana’s Andy McBrine has already achieved much in 2019 - but now he is relishing the prospect of playing before his home fans against a Zimbabwe side that is set to play in Ireland for the first time since 2003.

The 26-year old off-spinner and captain of the North West Warriors, who is busy preparing for Monday’s Test Triangle Inter-Provincial Championship match between the Warriors and Leinster Lightning, was clearly relishing the prospect of playing international cricket once more in front of his home fans:

“It will be a very proud occasion for me to play in front of home fans if I’m selected for the internationals being held in the North in July,” he said. “Especially at Bready - it is a magnificent ground and the Club has worked very hard over recent years to get the ground into shape to host big games like these.”

“As always, the weather is the only thing that would dull the atmosphere in the north-west - people in this area are passionate about the game and will get behind the Irish lads. And if the Domenana supporters are in, you may be hearing a bash of the Andy Scra song!”

Before the Zimbabwe series though, McBrine sees the upcoming Test Triangle Inter-Provincial T20 Festival at Pembroke in Dublin (22-24 June) as a key opportunity to press his claims for selection:

“The Inter-Pro T20 weekend is not only a great festival of cricket for players and fans, but a great build-up for the likes of myself and the Irish lads for game time before the Zimbabwe series and the T20 World Cup Qualifiers later in 2019. The Festival will give the selectors an opportunity to have a look at who is performing and who could cement a spot for the upcoming tournaments.”

While this will be the first time the African side will have visited Ireland for 16 years, Ireland will be looking for revenge after the Zimbabweans convincingly defeated the Men in Green by 107 runs at the ICC Cricket World Cup Qualifier in Harare in March 2018. McBrine himself was in the Irish team that day, bowling well with 2-42 from 10 overs, before being the last man standing with the bat as his colleagues collapsed around him.

In a boost to Irish cricket fans, the three T20 internationals played between the men’s sides will be doubleheaders, with Ireland Women playing their Zimbabwean counterparts on the same day at the same venues. Full fixture details here. Tickets are on sale through Ticketmaster now or at the gate.