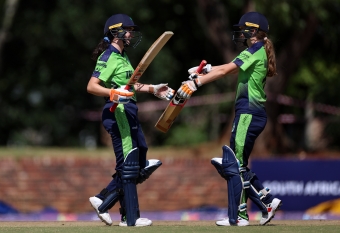 POTCHEFSTROOM, South Africa – Ireland’s involvement in the inaugural ICC Women’s Under-19 T20 World Cup may have come to an end today, but there was time for fans to potentially glimpse the future with a brilliant half-century from Merrion Cricket Club’s Annabel Squires.

Squires was superb - scoring 55 not out from just 52 balls, including five fours – as Ireland posted a total of 113-7 from their 20 innings.

Pakistan responded superbly, with their captain Syeda Aroob Shah and Warda Yousaf combining for a 56-run partnership as they reached their target with 15 balls to spare.

Having won the toss and elected to bat first, openers Rebecca Gough and Joanna Loughran set about trying to post a competitive target to defend.

Gough got Ireland off to a comfortable start, with a couple of sweet cut shots on the leg side off the bowling of Mah Noor, while Loughran scored the game’s first boundary in the second over. However, a mix-up in communications shortly after saw Gough (6) run out with Ireland 12-1. Loughran followed her five balls later when she hit across the line of the ball and lost her leg stump.

Further wickets fell, with Georgina Dempsey and the unfortunate Abbi Harrison – harshly adjudged to have been caught lbw - back in the tent, as Ireland were reduced to 46-4 at the halfway stage of the innings.

Zara Craig brought up Ireland’s fifty with a straight drive for four over the bowlers head, showing the power she possesses by clubbing four boundaries all over the North West University Oval in her quick-fire 17, off just 13 balls.

Squires went on to post her maiden half-century for Ireland by smashing a boundary to the leg side in the final over, before finishing on 55 not out. Anosha Nasir the best of the Pakistan bowlers, taking 2-17.

There was lots of positives to take from the batting display, with Craig, Squires, and Harrison, showing plenty of aggression throughout the innings.

Pakistan got their response off to an explosive start, scoring 12 runs off the first over. That aggression continued as openers Shawaal Zulfiqar and Eyman Fatima went on to put 44 runs on the board inside the powerplay.

Ireland’s bowlers responded, and back-to-back wickets from Zara Craig and Freya Sargent - with the last ball of the sixth over and the first ball of the seventh - saw both openers removed. First, Zulfiqar hit a cut shot to Aimee Maguire before Fatma skied one straight to Harrison, with Pakistan reduced to 44-2.

Despite the loss of those quick wickets Pakistan continued to bat aggressively, with Warda Yousaf and their captain Syeda Aroob Shah scoring freely in a 56-run partnership. Aroob eventually falling to Georgina Dempsey in the fifteenth over, with Pakistan just 14 runs shy of victory.

Yousaf went on to hit the winning runs, smashing a boundary to long off, as Pakistan reached their total with 15 balls to spare.