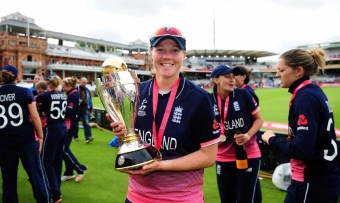 DUBLIN – While the world turns towards the gradual easing of restrictions from the COVID-19 lockdown, Ireland Women’s cricket team continues to take the opportunity for online learning while they await the chance to return to physical training – this time by participating in a bowling masterclass with England vice-captain and World Cup hero Anya Shrubsole.

Shrubsole has played at the elite level since 2008 and claimed 6-46 in the 2017 World Cup Final at Lord’s to lead England to a famous victory. In 2018, she became the first woman to appear on the cover of Wisden Cricketers’ Almanack.

The session was led by Ireland Women’s Head Coach Ed Joyce and also featured contributions from former English Women’s Head Coach Mark Robinson. The discussion focussed primarily on the World Cup Final – analysing Shrubsole’s mindset and thinking, particularly on how to perform in a high pressure situation was punctuated by clips of both Lanning and Joyce batting for their respective countries, to help illustrate discussion points. “It is a great opportunity for our senior performance and academy squads to hear from some of the most talented women cricketers in the world – earlier this month we held a batting masterclass featuring Meg Lanning, and now Anya Shrubsole has been so generous with her time.”

“The reason we focussed on Anya’s 2017 World Cup Final performance was that, in her own words, Anya had had an average tournament to that point - she felt the pressure and the very real risk of being dropped during the early stages. The mental strength she demonstrated to regroup and refocus midway during a pressurised tournament was incredible – and I feel it was the insights of Anya’s mental strength and psychology that was so instructive from this session.”

“Possibly the most insightful moment for the younger members of our squad was the realisation that even the England vice-captain at a World Cup has to work on her confidence and get herself mentally ready for the fight. Anya talked through the need to have a clarity of thinking and - regardless of the state of the game - always be considering what is the best option for the next ball.”

“What was also clear is – similar to Meg Lanning’s advice last session – players need to ensure that they know what they’re good at and do that well. That appears to be a common theme coming through these sessions.” Gaby Lewis, member of the Ireland Women’s squad since 2014 and participant in the masterclass, said:

“I was certainly intrigued to know more about the psychological side of performing ‘in that moment’ and how the squad as a whole prepared mentally for such a pressure situation.”

“We all have our ways to prepare, whether as a team or individually, and it’s reassuring to know that even the biggest teams in the world need to constantly work at this.”

“For a cricketer, nothing beats getting out in the nets or on the field, but I’ve enjoyed these masterclasses and the opportunities we’ve had to chat to some great players. With hopefully a World Cup Qualifier coming up later this year, these sorts of sessions can only be good for our squad in preparing for that event.”

The Ireland Women’s cricket team are due to compete at the ICC World Cup Qualifier in July in Sri Lanka, however, the ICC will provide an update on the tournament’s status in due course.