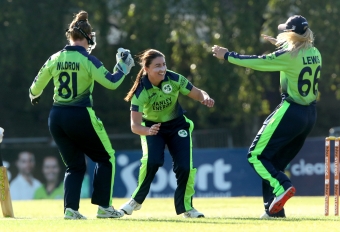 It’s been a remarkable year for Kelly – shortly after she arrived in Ireland, Kelly received a call-up to the Irish squad to play South Africa - tasting victory in her first match. Over the subsequent months she has become a regular feature of the senior international set-up and was rewarded with a full-time central contract.

The 28-year-old is now looking forward to ending the year on yet another high, by helping Ireland Women qualify for the 2023 ICC T20 World Cup in South Africa next February.

“I love a bit of pressure cricket; I think it brings out the best in players. I mean, there’s always going to be pressure when you’re playing against the world’s best. I’ve thoroughly enjoyed being able to compete against some of the world’s best this summer, they have been some of the highest-pressure situations I’ve experienced. Obviously, you’ve got to focus on controlling the controllables in those situations, and as a team we have spoken about that. We know we’re going to be faced with obstacles and things aren’t necessarily going to go our way at times, but I think addressing those scenarios early puts us in a better position to be able to adapt when that does happen.

“We’ve had some good wins of late and it’s great to have a bit of momentum heading into these qualifiers. The vibe within the squad is really good. This is a great team to be a part of. I’ve been involved in a number of different teams and the culture here is something special, so hopefully, we can continue to improve on this. Plus, a bit of pressure is always good for that.

“Personally, it has been an unbelievable year and a bit of a whirlwind for me to be honest. I’ve loved every second of it and I think I’m very lucky to have the opportunities that I’ve got. Following these qualifiers, I’ll need to take some time to sit down and reflect on what’s actually happened. But I’m thoroughly enjoying the experience and long may it continue.”

Kelly had to adapt to Irish conditions after arriving early this year, and knows that adapting quickly to new conditions will be vital if Ireland are to progress in the tournament:

“Conditions-wise, I did find it challenging initially. I think the wickets are far lower in Ireland, so from a batting perspective, it was playing the ball a lot later, which I’d like to think I have adapted to now. It’ll be the same challenge looking ahead to these qualifiers - It’s about how quickly you can adapt. There’s been a big focus on that from a team perspective too, and we’re really looking forward to getting things underway.”

The all-rounder has played club cricket with Malahide this season, a partnership she hopes to continue:

“Malahide have been fantastic. I’ve thoroughly enjoyed my time with the club. My commitments changed from what the initial expectation would’ve been. It was really cool to be able to contribute to the girls because it is quite a young side. To be able to help them out and hopefully do the same moving forward, and develop cricket there as well will be a fantastic opportunity. I also feel the people are a fantastic part of the club. I’m looking forward to building more relationships moving forward.” Is there anything from her experience of playing cricket in New Zealand that she thinks can help improve Irish cricket:

“I think the biggest learning for me since coming to Ireland is just you need to be playing against quality opposition as much as possible. You want to be playing against the best, and I think the more that Cricket Ireland are able to create those opportunities and experiences, the better it’ll be for the game. Just continuing to build depth, obviously now with these full-time contracts in place and with the opportunity to be playing cricket all year round, more young girls might see that as a potential career opportunity. Getting them involved at a younger age will help them love the game for longer.”

Kelly decided to choose the number 11 jersey when making her Ireland debut, and explains the reason why:

“Funnily enough my shirt number back in Auckland is usually 16 and that’s what I was used to. However, that number was taken, which was totally fine. And during the women’s cricket world cup, my brother got really interested in cricket. They’ve always supported me in my cricket, so it was awesome to see him get involved in a top-tier women’s sporting tournament and so his birthday is on the 11th of March. So when the opportunity to pick a new number came about it was without hesitation that I picked number 11, just to support him and remind myself of the impact that this game does have on people.”