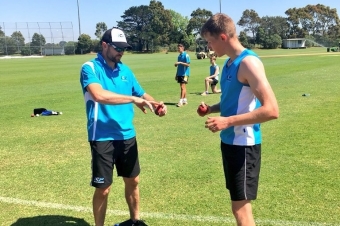 Jason Krejza provides some advice for Harry on spin bowling

Harry Tector is currently playing club cricket for Randwick-Petersham Cricket Club in Sydney and overnight he was named in the Club’s “Team of the Round” after scoring a 92 in second grade. He recently spoke to us about his time in Australia so far.

“I am currently in my fifth week of a 10-week International Cricket Programme and I am absolutely loving my time here in Sydney. I am playing for Randwick Petersham through the Cricket Ireland Exchange Programme and everyone at the club has been so welcoming and helpful during my time here so far.”

“The season starting off poorly for me on a personal level but we managed to beat St George 2nd grade by 8 runs which was a great start for us. The following week I managed to score 118 against the University of NSW which was a relief more than anything as it settled my nerves about getting a big score and proving myself to my teammates. We managed to win the game by 100 or so runs.”

“My weeks are pretty busy with the programme as we have running sessions, physio and mobility training, one-on-ones, group training with the rest of the guys in the programme, as well as gym and recovery sessions. The sessions mainly take place on the grounds of UNSW, but also at the SCG which is fantastic.” “The programme is split in half with 10 of us doing it full-time and nine others doing it part-time. It is predominantly made up of English County first and second team players so training is of a very good standard. It is run by Howard Grice who has been extremely beneficial for me so far in improving my game but we also work with Jason Krejza (former Australian off-spinner) and Grant Lambert (former NSW all-rounder), both of whom have helped me improve my batting and bowling with little tips and work ons.”

Harry subsequently scored 11 against North Sydney in a 50-over match (a match that had to be abandoned because: “Armageddon struck with the heaviest rain, thunder and lightning display I have ever seen”) and a 70 against Western Suburbs in a two-day game.

As well as second grade, he plays for the Poveidon Grey Under-21’s side at the club (“we have won 2 from 3 games against Sydney Uni, Sutherland and East’s, myself scoring 20 odd in all those games without kicking on to get a big score which was disappointing”), but says that Daniel Bell Drummond has just joined the mighty ‘Randy Petes’ so he’s looking forward to getting to know him and hopefully learn a thing or two from him as: “he is a serious player and a lovely guy also”.

Outside club cricket life in Sydney, Harry was recently selected by Cricket Ireland to attend the upcoming batting camp in Bangalore, which he says: “...will no doubt improve my game against spin. I’m also looking forward to seeing my Knights teammate and roomie James ‘Princer’ McCollum again on that trip which will be good!”

He was also recently named the Male Academy Player of the Year at the Cricket Ireland Awards.

“As I said in my video for the event, the Academy has really played a huge part in my development as a player since I was 13, when Craig Hogan and Ryan Eagleson started it up. Now with Pete Johnson at the helm, as well as Eagy and Ed Joyce, it continues to benefit me and many others hugely. A massive thanks has to go to Shapoorji Palonji for their continued support of young Irish cricketers and hopefully we will start to see the fruits of their labour on show for Ireland, Men and Women, now and in the years to come.”

And what of life in Sydney outside of cricket?

“Aside from cricket I have been taking in all Sydney has to offer and have grown fond of the Coogee Bay Hotel and Pavilion when time allows - as well as spending as much time at the beach as possible!”

“I would just like to wish the Laura and everyone on the Irish Women’s Cricket Team the very best of luck in the T20 World Cup. I have no doubt they will do our small island proud.”