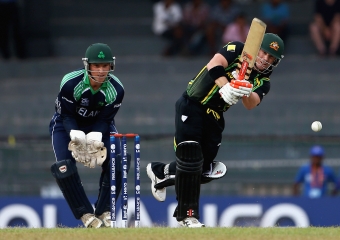 The first match of Group B in the ICC World Twenty 20 was a very one-sided affair as Ireland were outplayed by Australia and lost by 7 wickets.

Everything looked very positive leading into the the first match of the tournament for Ireland. Perfect preparation with weeks of acclimatisation in the hot and humid conditions, plenty of players in good form and four warm up wins in four matches. Expectations were very high, and when William Porterfield won the toss and chose to bat first on a fast pitch at the Premadasa stadium in Colombo everything was set for another big Irish performance on the world stage.

Phil Simmons and his management team will be particularly disappointed as Ireland were never really in the match today. Shane Watson bounced William Porterfield first ball and he was caught hooking at deep fine-leg to leave Ireland 0 for 1. Paul Stirling hit a glorious boundary over extra cover but he too was caught on the boundary taken well by a running Shane Watson. When Ed Joyce and Gary Wilson fell in quick succession Ireland were staring down the barrel at 33 for 4 scoring at 4 runs an over.

This brought Kevin O’Brien to the crease and he joined his brother Niall and set about putting some respectability on to the Irish total. Although they had to consolidate at first, they soon began to score at more than a run a ball and put on 52 runs to leave Ireland at 85-4 with nearly 6 overs to go and some hope of a total around 140 which may have been competitive. But Shane Watson returned to the attack and when he removed both O’Brien brothers in the 15th over, Ireland lost all momentum.

All of the Australian bowlers caused Ireland problems with Mitchell Starc’s left arm pace and Brad Hogg’s left arm spin backing up Shane Watson’s 3 for 26. Despite Alex Cusack & Nigel Jones’ best efforts late in the innings Ireland could not get the ball away to the boundary and ended with a very much sub-par 123 for 7 from their 20 overs.

With Australia needing just a run-a-ball on a very good batting pitch, Ireland would need to strike early to have any chance of restricting Australia. Boyd Rankin and Trent Johnston found some assistance early, but the ball wouldn’t quite go to hand and the few half chances created were put down, and Australia were in no mood to be complacent. David Warner and Shane Watson set about the Irish attack and scored with plenty of freedom. Warner hit four boundaries before holing out to Kevin O’Brien off George Dockrell but not before he had put on 60 with Shane Watson for the first wicket.

Watson then set about crowning his Man of the Match performance by smashing the Irish bowlers all around the ground and he hit 3 sixes and 5 fours in his 30 ball 51 that effectively sealed the game for Australia.

Ireland fought hard but will feel that were definitely under par in all three departments. Kevin O’Brien bowled well to cap a good all-around day that followed up his 35 with the bat earlier but Ireland’s spin pair of Paul Stirling and George Dockrell went at 10 runs per over and in the end Australia were far too good on the day.