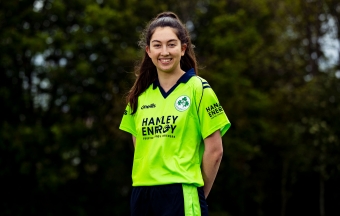 DUBLIN – Cricket Ireland has today announced that Ava Canning has been offered a non-retainer contract and has joined the senior women’s performance squad.

Canning, 17, made her international debut in the first T20 International last month against Scotland. She plays for the Typhoons in the Arachas Super Series and Leinster Cricket Club at club level – a clubmate of Irish captain Laura Delany.

Taking up the game at the age of 10 (Canning also played basketball and football), cricket soon became her number one sport.

In the recent international series, Canning claimed three wickets – but what was most impressive was the manner of her bowling. She had the series second-best economy rate of 4.15 runs per over and took her wickets at an average of 18.00. Her dot ball percentage was also second-best for either team at 66.67.

“I was delighted to be selected for the senior squad and to make my debut, especially in a home series. I’ve worked very hard on my game since my injury last year. Being given the chance to play for Ireland was so rewarding and the team couldn’t have been more supportive throughout the series. I was quite nervous going into that first game, but taking a wicket early in the game was the dream start for me. It really helped to calm my nerves and allow me to relax into the rest of the game.”

“It’s now very exciting to receive the offer of a place on the senior performance squad, as the training and support from the coaches will be great to experience. I think it’s a brilliant opportunity to help improve my game and allow me to spend more time training and playing with the other squad members.”

“Ava has been on our radar for a couple of years, but unfortunately had a full season out last year with injury. She has impressed greatly on her return to fitness in both the Arachas Super Series and during the four T20 Internationals against Scotland recently. Her accuracy and control, combined with the swing she can create with a new ball, has made life difficult for numerous batters, and we felt she was ready to take that step up within the system. We wish Ava well in what will be a big year for women’s cricket in Ireland.”

Background to the player contracts

Retainer contracts: Cricket Ireland introduced its first part-time professional contracts for women in 2019, and six contracts were offered again in 2020. A seventh was added for 2021.

Non-retainer contracts: As a boost to the women’s game, a new category of non-retainer contracts was introduced in 2020, which benefitted players year-round through:
• medical and healthcare insurance;
• sports science support - strength and conditioning, psychology, performance analysis and lifestyle management;
• psychology, nutrition, performance analysis, lifestyle management and specialist coaching support;
• loss of earnings for all competition periods;
• match fees for all international matches; and
• for ROI players, full access to the Sport Ireland Sports Institute.